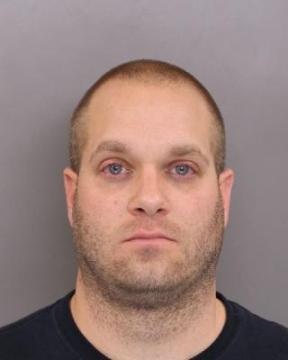 Frank Wilcox, 35, has been charged with third-degree burglary and second-degree assault. Wilcox is a 17-year veteran of the Baltimore County Police Department. His most recent assignment was at the White Marsh Precinct.
Just before 1:00 a.m. on January 6, 2020, Baltimore County Police responded to the 7400-block of Blevins Avenue, 21219 for the report of an assault. The subsequent investigation determined that Wilcox began an argument with the homeowners at this location over a domestic issue, forced his way inside the house, and then pushed the victim. The victim fell to the floor after being pushed. Other witnesses were able to remove Wilcox from the area prior to police arrival. Wilcox later turned himself into police during the investigation.
“The officers of the Baltimore County Police Department are obligated to not only enforce the law but to uphold the law in both their professional and personal lives. The allegations that have been made in this case are serious and very concerning, they are not representative of the values and ethics of the many officers and professional staff of the Baltimore County Police Department who dedicate their lives to ensuring the safety of others. Mr. Wilcox remains suspended without pay while the judicial process takes place,” according to Corporal Shawn Vinson. He is currently being held at the Baltimore County Department of Corrections on a denied bail status.