Police Arrests Teen, 17, Who Killed Woman, 49, Inside Their Home 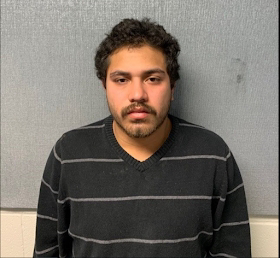 The Prince George’s County Police Department’s Homicide Unit identified and arrested a teenager who killed a woman inside of a Lanham home. The suspect is 17-year-old Marcos Reyes Moreno of the 6900 block of Lamont Drive in Lanham. He’s charged with the fatal stabbing of 49-year-old Blanca Aguilar. The suspect and victim both rented rooms in the home and are not related to each other.
The victim had been reported missing to the PGPD by members of her family over the weekend. On Wednesday, at approximately 12:40 pm, patrol officers responded to Nashville Drive at Wilhelm Road after the victim’s car was located there. Officers also then responded to her home in the 6900 block of Lamont Drive. The victim was located inside of the home suffering from trauma which was later determined to be stab wounds. She was pronounced dead on the scene.
The preliminary investigation reveals Reyes Moreno stabbed the victim during an argument.
Reyes Moreno is charged as an adult with first degree murder and related charges. He’s in custody of the Department of Corrections. A court commissioner ordered him held on a no-bond status. He has admitted his involvement in the fatal stabbing.
Anyone with information on this case is asked to call 301-516-2512. Callers wishing to remain anonymous may call Crime Solvers at 1-866-411-TIPS (8477), or go online at www.pgcrimesolvers.com, or use the “P3 Tips” mobile app (search “P3 Tips” in the Apple Store or Google Play to download the app onto your mobile device.) Please refer to case 20-0004984.