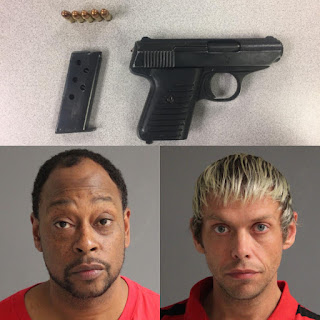 On January 29, 2020 at approximately 11:55 p.m., officers conducted a traffic stop on a white Mercedes Benz in the area of Crain Highway and Crainmont Drive in Glen Burnie.

Upon approaching the vehicle, officers noticed a strong odor of marijuana emanating from the vehicle. The vehicle occupants were detained and a search of the vehicle resulted in the recovery of small glass pipe used to ingest CDS and a Jimenez Arms .25 caliber handgun.

Both the driver and passenger of the vehicle were arrested and transported to Eastern District for processing.