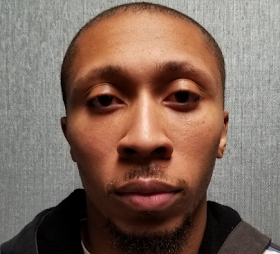 On Tuesday, a Prince George’s County grand jury indicted Martique Vanderpool on a list of charges to include rape and exposing/attempting to expose the victim to HIV.  In December of 2019, the PGPD arrested the former officer with the Fairmount Heights Police Department for raping a citizen after a traffic stop, prior to his resignation from that agency.
Earlier this month, a judge initially dismissed the first-degree rape charge and remanded Vanderpool to home confinement and placement on electronic monitoring. The grand jury, after receiving all of the evidence, returned the charges yesterday to include first-degree rape charge.
The Prince George’s County Police Department’s preliminary investigation reveals that on September 6, 2019, Vanderpool and a second officer with Fairmount Heights Police conducted a traffic stop at Sheriff Road and Cabin Branch Drive in Capitol Heights. The victim, an adult female, was the driver of that car and only occupant. During the stop, Vanderpool asked the victim to step out of her car. She was placed into handcuffs. Vanderpool then called for a tow truck to impound the victim’s car. The victim was ultimately taken back to the Fairmount Heights Police Department. While there, Vanderpool demanded the victim engage in a sex act or be arrested. The victim complied. After the sexual assault, Vanderpool issued the victim several citations, drove her to the impound lot and had her car released back to her.
As a result of the ongoing investigation, PGPD confirmed that Vanderpool was HIV positive and the grand jury returned the indictment.
If you were a victim of a sexual assault involving Vanderpool or if you’ve had sexual contact with him and he did not disclose his HIV diagnosis and would like to speak to a detective, please call 301-856-2660.
The Prince George’s County Health Department offers HIV screening. Anyone who would like testing or speak to someone anonymously is urged to call 301-583-3150.