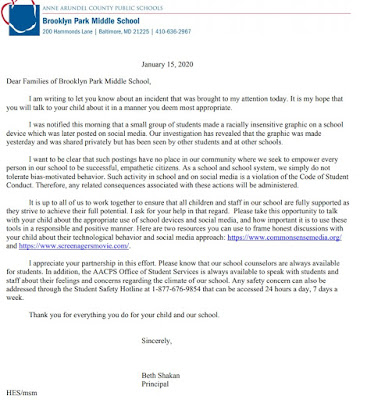 The principal for Brooklyn Park Middle School on Wednesday sent home a letter stating that a "racially insensitive" graphic had been created by a group of students while at the school.

"I was notified this morning that a small group of students made a racially insensitive graphic on a school device which was later posted on social media," the principal wrote in the letter.  "Our investigation has revealed that the graphic was made yesterday and was shared privately but has been seen by other students and at other schools."

The letter fell short of starting whether or not the students were being supervised while the graphic was made on the school devices, and what if any preventative measures would be taken to help prevent similar incidents from happening in the future.

"Such activity in school and on social media is a violation of the Code of Student Conduct. Therefore, any related consequences associated with these actions will be administered."