2016 Clinton Campaign Financier, Also Once a Witness in Mueller Probe, Admits to Transporting a 14-year-old Boy from Europe to Dulles International Airport for Purposes of Engaging in "Illegal Sexual Conduct" 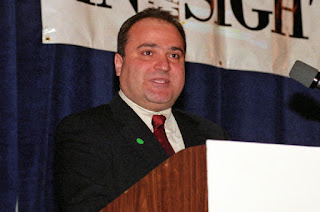 George A. Nader, of Wyoming Avenue is Washington DC pled guilty today to a two-count criminal information charging him with child exploitation offenses. He faces a mandatory minimum penalty of 10 years in prison and a maximum penalty of 50 years when sentenced on April 10.

According to court documents, Nader admitted that he arranged to transport a 14-year-old boy from Europe to Dulles International Airport for purposes of illegal sexual conduct in early 2000. Nader had met the boy in Prague, Czech Republic, and later brought him to his residence in Washington, D.C. Nader also admitted that, in September 2012, he possessed or accessed with intent to view video images of child sexual abuse while he was in New York. In exchange for the plea, the government agreed to dismiss an indictment involving similar charges returned in the Eastern District of Virginia in July 2019.

Nader pled guilty to one count of transportation of a minor boy for purposes of illegal conduct and one count of possession of child pornography, and faces a mandatory minimum penalty of 10 years in prison and a maximum penalty of 50 years when sentenced on April 10. Actual sentences for federal crimes are typically less than the maximum penalties. A federal district court judge will determine any sentence after taking into account the U.S. Sentencing Guidelines and other statutory factors.

Nader had been previously been convicted of transporting child pornography into the Eastern District of Virginia in 1991.

In December 2019, Nader was charged in U.S. federal court with violating campaign finance laws by allegedly also using over three and half million dollars to reach out to Hillary Clinton's 2016 campaign for the U.S. Presidency, through a front.

According to the New York Post, Nader is accused of funneling millions of dollars in contributions through Allied Wallet CEO Ahmad “Andy” Khawaja, Khawaja’s wife and Khawaja’s company to Clinton’s campaign between March 2016 and January 2017.