Michigan Man Arrested, Charged Following Recovery of 16, 000 Boxes of Untaxed Cigarettes on I-95 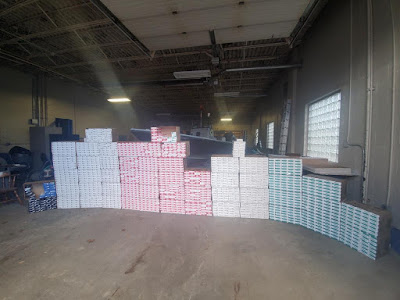 A Michigan man was arrested and charged after more than $34,000 in untaxed cigarettes were seized during a traffic stop on I-95 in Harford County, according to Maryland Department of Transportation Police.

On Thursday afternoon, MDTA Police arrested a Michigan man during a traffic stop on I-95 in Harford County. The MDTA Police contacted agents from the Maryland Comptroller’s Office Field Enforcement Division who charged the 20-year-old-man with transporting cigarettes within Maryland without the tobacco tax being paid and unlawfully possessing 16,200 unstamped tobacco products. The total tax loss for the state of Maryland is $34,400.00.
An MDTA Police Officer stopped a 2019 Ford Transit Van on northbound I-95 for impeding the flow of traffic. During a subsequent probable cause search of the vehicle, officers located a large number of trash bags containing 1,620 cartons or 16,200 packages of various untaxed cigarettes. The driver was taken into custody without incident and transported before a Harford County Commissioner for his initial appearance.