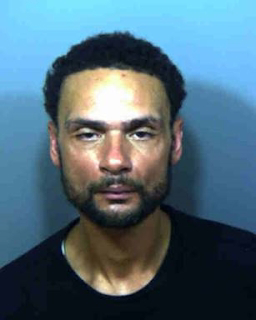 A man who had just been arrested for domestic assault is facing multiple new charges after he stole a police cruiser and crashed it after a short pursuit. He is 43-year-old Abdul Hakim of the 6100 block of Breezewood Court in Greenbelt.
On January 18th, at approximately 7:15 am, our officers responded to the 2300 block of University Boulevard for a domestic dispute. Officers learned that Hakim had assaulted a female. Officers observed physical bruising on the victim’s face and arrested Hakim for domestic assault.
He was taken to the Department of Corrections in Hyattsville for processing, but it was determined he would need to instead be brought to DOC in Upper Marlboro due to an underlying medical issue. The arresting officer brought Hakim back to his cruiser which was parked in a sally port outside of the Hyattsville DOC. The officer secured Hakim, who was handcuffed, in a seatbelt in the front passenger seat. The officer started his cruiser and then kept the vehicle running in order to provide heat for Hakim. The officer then asked a fellow officer who was nearby in her cruiser to monitor Hakim to allow for the arresting officer to go briefly back inside of DOC.
While the officer was inside, the second officer checked on Hakim after noticing that Hakim was moving in his seat. Hakim told the officer his handcuffs were too tight. After checking the cuffs, the officer adjusted them and then resecured Hakim back into his seat. Moments later, Hakim managed to get into the driver’s seat of the cruiser and put the vehicle into gear. The second officer tried to open a door to stop Hakim, but it was locked. Hakim struck a brick wall and sped away.
With the assistance of the Hyattsville City Police Department, officers began to pursue Hakim. During the pursuit, Hakim struck several cars before eventually crashing the cruiser at a park near 24th Avenue and Lyndon Street. He then ran on foot. Officers arrested him on 19th Avenue. He still had on the handcuffs but had managed to slip his arms around to the front of his body. No one was hurt during the pursuit and apprehension.
“I am proud of the lengths to which my officers went to demonstrate their compassion to a sick individual they had arrested for a violent act on a cold day. It is always discouraging when an individual exploits kindness to commit more violence and endanger more people. Due to his actions, my agency is now reviewing the practice of leaving a cruiser running for any reason at all,” said Chief Hank Stawinski.
In addition to the original domestic-related charge, Hakim is now also facing assault, resisting arrest, reckless endangerment, unauthorized removal of a motor vehicle, motor vehicle theft, second degree escape and theft as well as traffic offenses.
The Prince George’s County Police Department is investigating this incident.