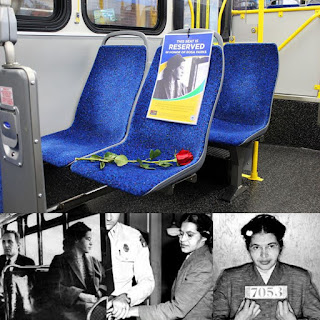 42 year old Rosa Louise McCauley-Parks was on her way home from work on December 1, 1955, when she refused to give up her seat to a white man on a public bus in Montgomery Alabama. Her subsequent arrest prompted a 381-day boycott of the bus system, organized by the Rev. Martin Luther King Jr.

A ruling by the Supreme Court later desegregated public transportation in Montgomery, but it was the 1964 Civil Rights Act that made all public accommodations desegregated nationwide.

According to the Milwaukee Transit System, one seat was kept open on every bus in its fleet for three days, from December. 1 to December. 3.   Each reserved seat has included a red rose, a special placard featuring Ms. Parks' photo and a message about her courageous act.

Yesterday, the late heroine was celebrated with the unveiling of a statue in Montgomery, Alabama, 64 years to the day she was arrested for refusing to move to the back of a city bus in that very town. 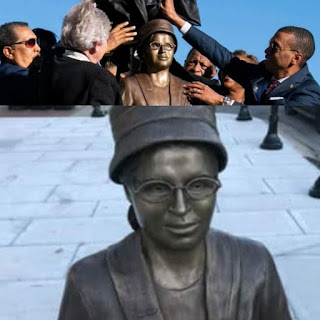 After the Montgomery Bus Boycott, Rosa Parks went on to become a major symbol in the civil rights movement. She died on October 24, 2005 at the age of 92.