Suicidal Man Killed After Shooting at Police, FBI During Lengthy Standoff in Linthicum 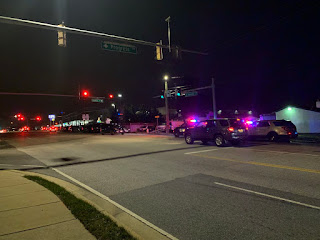 The Anne Arundel County Police Department and the FBI together are investigating a fatal shooting at a home where a suicidal man and law enforcement exchanged fire during a nearly three-hour standoff.

According to a police spokesperson, yesterday afternoon at approximately 2:00 pm, officers responded to a report of someone opening fire inside a home located in the 1200 block of Gloria Avenue in Linthicum.

When officers arrived on the scene,  police say they were confronted by an "extremely agitated" adult male on the screened-in porch of the home with a gun. The suspect refused to drop the weapon and began threatening to harm officers and himself.

Various negotiation techniques were attempted but were unsuccessful, which then required assistance from the FBI's tactical response team.

In response to the suspect refusing to drop his weapon and firing the weapon multiple times, members of the tactical team and Anne Arundel County Police officers returned fire. The man, who has not yet been identified by authorities, died at an area hospital after being struck during the exchange.

There were no other injuries or deaths reported.

The suspect’s body was taken to the Office of the Chief Medical Examiner in Baltimore for an autopsy. It remains unclear whether a police officer, the FBI or both agencies fired the fatal rounds.

The investigation is open and ongoing, and no further information was made available.