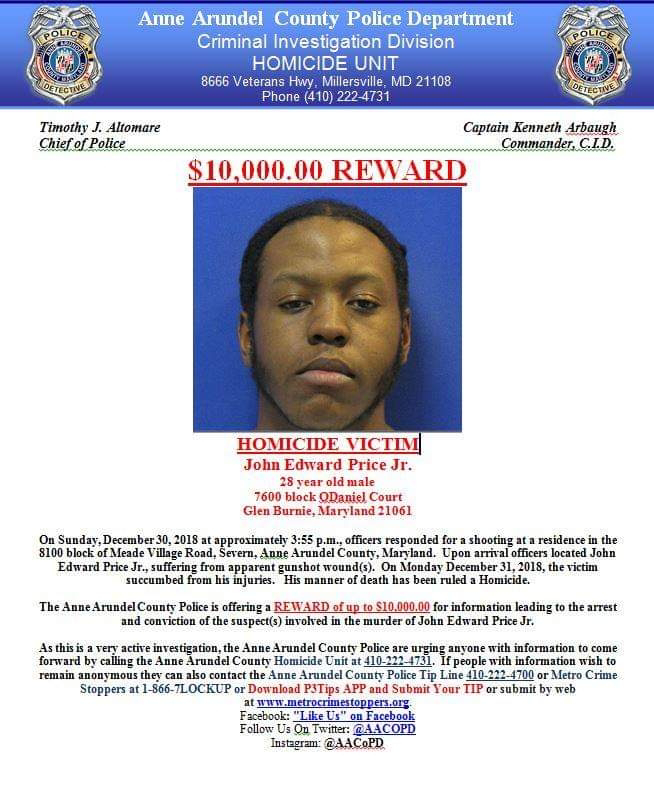 Monday, December 30th will mark the one year anniversary of the shooting death of 28 year old John Edward Price Jr. of Glen Burnie, Maryland.  John was shot and killed in the 8100 block of Meade Village road in Severn on December 30, 2018.  His death was ruled a homicide.
As this case remains unsolved, detectives are again asking the public's help in providing any information that could lead to the identity of of the shooter(s). As a reminder, there is a reward of up to $10,000 for information leading to the arrest and conviction of the suspect(s) involved in the murder of John Edward Price Jr.
Anyone with information is encouraged to come forward by calling the Anne Arundel County homicide Unit at 410-222-4731.  Callers wishing to remain anonymous are asked to call the Tip Line at 410-222-4700 or metro Crime Stoppers at 1-866-7LOCKUP or Download P3Tips app and submit your tip.  Tips may also be sumbitted via www.metrocrimestoppers.org.