Annapolis Celebrates (& Joins!) Dozens of Local Businesses Who Have Pledged to Reduce or Eliminate Single-Use Plastics

Mayor Gavin Buckley signed a pledge that the City of Annapolis will work toward reducing the City’s plastic footprint as part of the fall campaign: “Plastic Free Annapolis.” Mayor Buckley signed the pledge at City Hall, encouraging all Annapolitans to reduce or eliminate their use of single-use plastics. 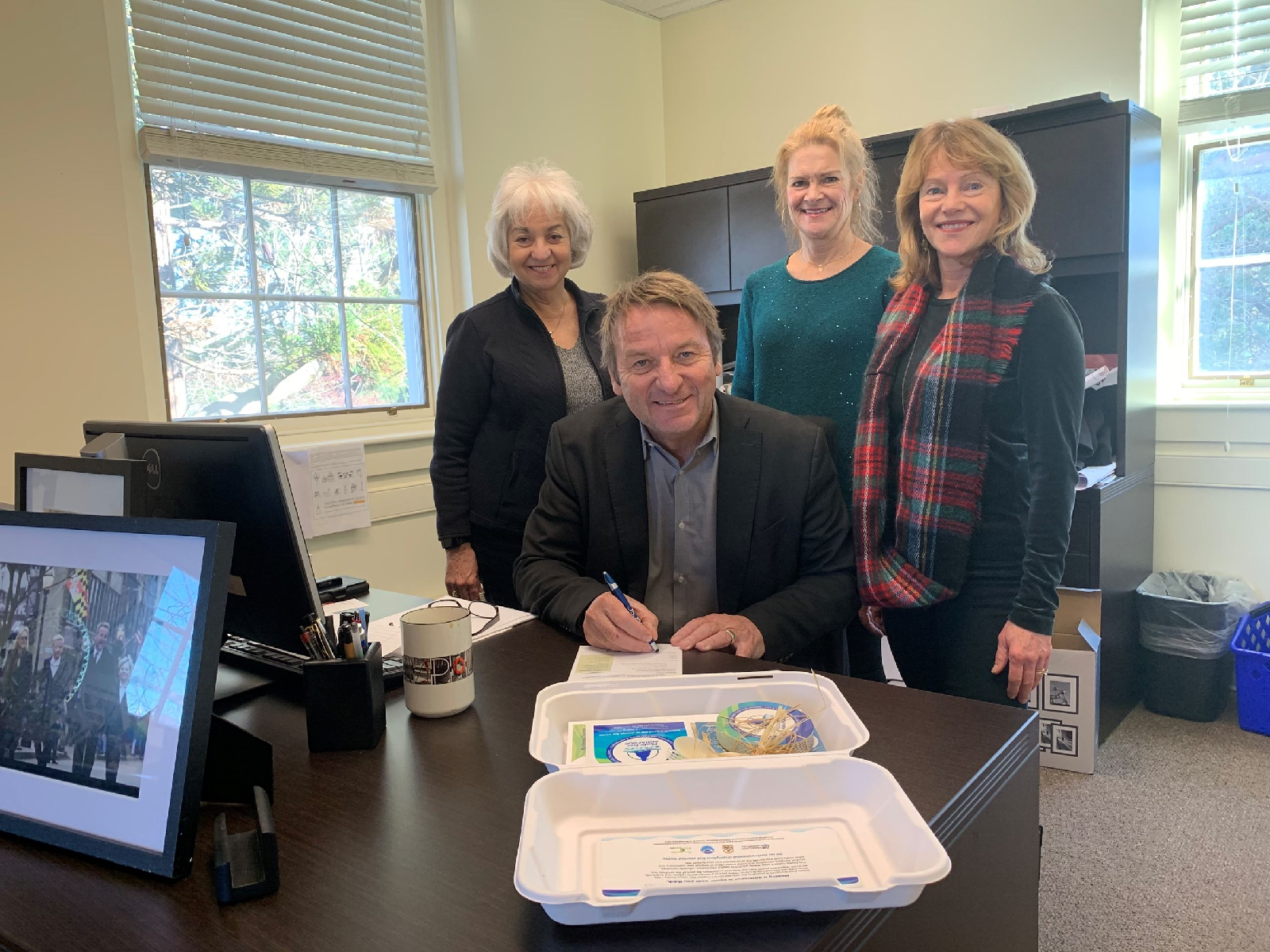 The campaign was created and implemented by Annapolis Green on behalf of the City’s Office of Environmental Policy. The program took a grassroots approach to having local businesses agree to reduce or eliminate their use of plastics.

“We all know that there is far too much plastic waste. It’s in our landfills, in our waterways, polluting our oceans. We all have a responsibility to make the effort to reduce and eventually eliminate single-use plastics,” Mayor Buckley said. “This information campaign asks people to think about this problem because information is an important first step to finding a solution.”

The campaign seeks to inform residents, visitors, and businesses about ways to voluntarily reduce throw-away plastic, including water bottles, plastic bags, straws, carry-out containers, and balloons. As implemented, the fall program focused on asking businesses to consider discontinuing the use of these items – or to choose more environmentally friendly alternatives. As of the beginning of December, more than two dozen businesses had signed on.

“The world is drowning in plastic. Oceans and rivers are clogged with it, and a lot of the litter is made up of food and beverage containers,” said Elvia Thompson, President and Co-founder of Annapolis Green. “We partnered with many Annapolis businesses at the start of this campaign because they can do a lot to keep our environment plastic free by voluntarily changing some of their everyday practices to show their customers that they are good stewards of the environment. We are thrilled that Mayor Buckley is backing the campaign.”

To help businesses get started, Annapolis Green provided businesses that signed on with a toolkit and online resources, including free social media promotion, newspaper advertisements and marketing tools. While the original campaign focused on hospitality businesses, the Mayor is encouraging the extension of the campaign and the messaging to the City, Annapolis residents, visitors, and all businesses.

In 2018, Annapolis Green launched its “Don’t Suck. #SipResponsibly.” campaign by providing restaurants, bars and coffee shops with paper straws along with information about alternatives.

“When we started our campaign to do away with plastic straws we saw a wave of support on the part of restaurant patrons,” said Lynne Forsman, Annapolis Green Co-founder. “Restaurant managers were quick to sign on with either a ‘plastic straws upon request’ policy or a switch to paper or reusable straws, or no straw at all. They could see the tide turning against the 500 million plastic straws used and thrown away every day in the United States.”

In 2019, Annapolis Green expanded the campaign to all types of throw-away plastic, rebranding it as “It Starts with a Straw.” Now Annapolis Green and the City are teaming up in common cause, in a movement to change habits and reduce pollution at its source for a cleaner, more beautiful Annapolis with participation from businesses, residents and visitors.

Plastic Free Annapolis was made possible by a grant from the National Oceanic and Atmospheric Administration through the Maryland Department of Natural Resources’ Coastal Zone Management Office.