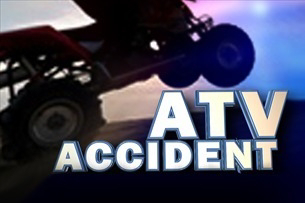 Shortly after midnight on Saturday, firefighters responded to an all-terrain vehicle accident in the 700 block of Governors Bridge Road in Davidsonville.
The initial 9-1-1 caller reported that the incident was located approximately ¼ mile into the woods and that three riders were unconscious.
Firefighters found the accident approximately ½ mile into the woods. An ATV left a trail and rolled down a steep embankment, ejecting the three riders. The riders ended up at the bottom of the embankment with the ATV on top of them.
Bystanders had removed the riders from the ATVs before the arrival of first responders.
All three of them were treated by paramedics, removed from the woods and transported to a Maryland State Police and a United States Park Police medevac helicopter, which landed near the scene.
One 23 year old female, one 21-year-old female and a 21-year-old male, all were transported by helicopter to the trauma center at UM Prince George’s Hospital Center with injuries that were serious but not believed life-threatening.