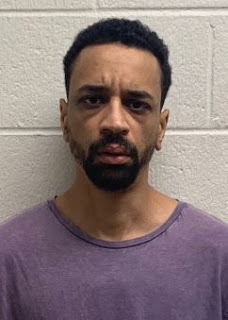 The Prince George’s County Police Department has once again arrested the man who broke into at least seven residences in College Park since November 16th. In at least five of the cases, he’s facing peeping tom charges.
He is identified as 37-year-old Aaron Nysus of the 3400 block of Notre Dame Street in Hyattsville. Detectives took him into custody again this morning.
Mr. Nysus is facing a new charge of first-degree burglary. The PGPD had arrested him last Friday on five previous charges but he posted bail and was released from the Department of Corrections the same day.
Nysus is now charged in connection with a break in on November 16th at a residence in the 4600 block of College Avenue. In that case, one victim awoke to Nysus in the home, which is a sorority house. Nysus fled moments after the victim woke up. Detectives have since spoken to a second victim in that home who advised a personal item was taken during the break-in.
In the other incidents, PGPD officers were called to an apartment building in the 4300 block of Hartwick Road on December 8th. They spoke to a victim who told officers that at 5:45 am, she awoke to the sound of her front door opening. She went to investigate the noise but didn’t find anyone in her apartment. Detectives reviewed surveillance video from the building and saw that Nysus was the suspect who broke into her apartment. He also was seen on surveillance video checking the doors of approximately 25 apartments that same morning. He walked into three other apartments while inside of the building. He stayed in each of those apartments for several minutes. In each of those cases, residents were inside and unaware of his presence.
Through various investigative techniques, detectives identified Nysus and obtained an arrest warrant which was executed on December 13th.  During the search of his home, items of evidence were also recovered linking him to a break-in in an apartment on November 17th in the 4000 block of Knox Road. In that case, the victim woke up to Nysus standing by her bed. He then ran from her apartment.
Nysus is now charged with first-degree burglary and five counts of trespassing/peeping tom and fourth degree burglary.
Please call detectives if you have information on Nysus or are concerned you’ve been victimized by Nysus. They can be reached at 301-699-2601.
Callers wishing to remain anonymous may call Crime Solvers at 1-866-411-TIPS (8477), or go online at www.pgcrimesolvers.com, or use the “P3 Tips” mobile app (search “P3 Tips” in the Apple Store or Google Play to download the app onto your mobile device.)