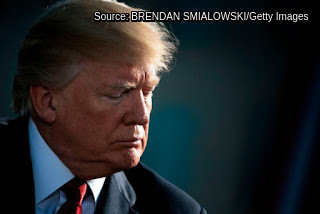 In an unprecedented attempt to thwart the Presidency of Donald J. Trump, house democrats have voted to impeach the Republican President, with evidenceless allegations of abuse of power and obstruction of congress.

This flagrantly nefarious move was made  with absolutely no republican support, along with two courageous democrats opposing.  Representatives Collin Peterson (D-Minn.) and Jeff Van Drew (D-N.J.) boldly voted against the impeachment of President Trump, while Presidential hopeful Congresswoman Tulsi Gabbard (D-Hawaii) abstained, saying she was "standing in the center," as the only democrat who didn't cast a vote either for or against the articles of impeachment.

Congressman Sarbanes took to twitter to all but brag about casting his vote for the impeachment of President Trump, albeit contrary to the wishes of the majority of Marylanders.  "Today, I voted to impeach President Trump for abuse of power and obstruction of Congress," Sarbanes tweeted. "Members of Congress were called upon to uphold our oath of office and our duty to the Constitution, and we answered that call," he continued.

Maryland's lone Republican Congressman, Representative Andy Harris (R-MD), also tweeted following the House vote, saying that he was proud to have gone on the record as part of the consortium of House Republicans (197 votes) who voted against the impeachment.  "Proud to stand for my constituents and to defend the President," Congressman Harris announced on twitter.  "This partisan impeachment is truly a hoax and a sham!" 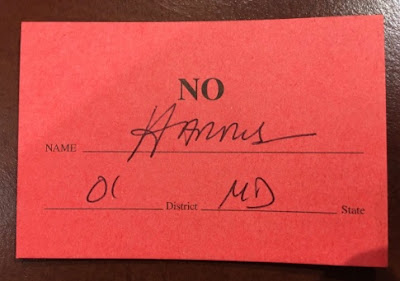 The White House Press Office released a statement saying President Trump was denied fundamental fairness and due process under the law.  "Today marks the culmination in the House of one of the most shameful political episodes in the history of our Nation," the statement read. "This administration remains confident the Senate will restore regular order, fairness, and due process, all of which were ignored in the House proceedings."

Fortunately, the buck doesn't stop with the House Democrats.  Under the United States Constitution, only a Senate trial will determine whether or not the President gets removed from office. President Trump is the first ever Republican President to be impeached, but third on the list of three sitting Presidents impeached by Congress.  The 17th President, Andrew Johnson in 1868 and the 42nd President, Bill Clinton in 1998, both Democrats, were impeached before President Trump, although neither of them were removed after their respective Senate trials.

On December 19, 1998, President Clinton became the second American president to be impeached, after the House formally adopted articles of impeachment involving perjury and obstruction. On February 12, 1999, President Clinton was acquitted on both counts after a long 5-week Senate trial.

Currently, only 45 of the 100 United States Senators are Democrats.  In the lamentable instance that every Democratic Senator voted to remove President Trump, about 20 of the 53 Republican Senators would have to agree with their Democratic counterparts in order to obtain the required two-thirds majority that is necessary to remove an impeached President.  Therefore, the very low probability of President Donald Trump being removed from office is the saving grace for all of America.