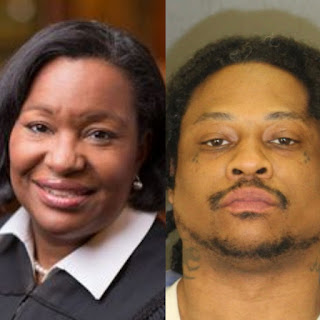 The Chief Judge for the Baltimore City Circuit Court required medical attention this morning, after being struck in the head by a metal water pitcher while sentencing a convicted sex offender to life in prison.

According to a Maryland Judiciary spokesperson, today at approximately 10:40am, The Honorable Chief Judge Wanda Keyes Heard was presiding over a sentencing hearing in a courtroom inside the Clarence Maurice Mitchell,. Jr. Courthouse on North Calvert Street in Baltimore. Upon completion of the sentencing hearing, the defendant proceeded to reach for a water pitcher and threw it at Judge Heard. "She recessed her court to seek medical attention," Public Information Officer Nadine Maeser said.

Major Sabrina Tapp-Harper, Public Information Officer for the Baltimore City Sheriff’s Office, confirmed that her honor was indeed struck in the head by the metal pitcher.  "Yes, it was Judge Heard’s head that was injured," she said.  "She was treated by medics on the scene."

The defendant involved in this incident was identified as 36 year old Travis Damon Burroughs of Baltimore.  Mr. Burroughs was before Judge Heard today after being convicted of sodomy and false imprisonment, according to court records.  He had just been advised of his life sentence, with all but 70 years suspended, before he threw the metal water pitcher at the judge, striking her in the head, officials said.  Mr. Burroughs was already serving an 80 year prison sentence on an unrelated rape conviction prior to today, and now faces new charges for assaulting the judge, including: first degree assault, second degree assault and use of a deadly weapon with the intent to injure, according to Major Tapp-Harper.

Several online biographies related to Judge Heard indicate that her 20 year tenure on the bench preceded a very successful career as a lawyer after being admitted to the bar more than 35 years ago.

A native of Long Branch, New Jersey, Judge Wanda Keys Heard is a member of the  Zeta Phi Beta Sorority, and attends Baltimore's New Psalmist Baptist Church, where the late Congressman Elijah Cummings also attended until his death in October.  Judge Heard is expected to be recognized by The Daily Record on December 16 during their annual Icon Honors Awards Gala held at the Center Club in Baltimore.  According to thedailyrecord.com, The Icon Honors Awards recognizes Maryland business leaders over the age of 60 for their notable success and demonstration of strong leadership both within and outside of their chosen field.