Man Sentenced to 33 Years in Prison for Committing Two Armed Robberies; Authorities Say 46 Year Old 'Punkin' Shot a Victim in One of the Robberies and Tried to Tamper with Witnesses 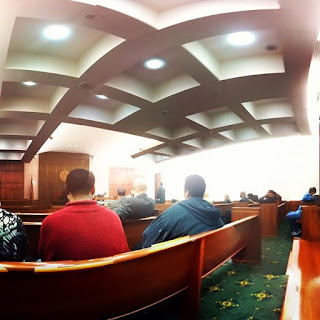 U.S. District Court Judge George J. Hazel today sentenced Ronnell Francis Lewis, a/k/a Punkin, age 46, of Washington, D.C., to 33 years in federal prison, followed by five years of supervised release on federal charged related to Lewis’s participation in two armed robberies.  On July 3, 2019, after a seven-day trial, a federal jury convicted Lewis and co-defendant William David Hill, a/k/a Old Man and Tank, age 62, for conspiring to commit a commercial robbery; for using, carrying, brandishing, and discharging a weapon during and in relation to a crime of violence; for being felons in possession of firearms; and for interstate transportation of stolen vehicles, in connection with two armed robberies committed by the defendants in November 2016.  Lewis was also convicted of witness tampering.

“Ronnell Lewis used a gun to threaten employees at businesses he robbed—and shot an employee who resisted being bound and gagged,” said U.S. Attorney Robert K. Hur. “As a result of his choice to commit a crime with a gun, Lewis will now serve a lengthy sentence in federal prison, where there is no parole—ever.  Please put down the gun.  You’ll save a life, maybe even your own.”

According to the evidence presented at the seven-day trial, Lewis, Hill and a co-conspirator robbed an auto repair business in Clinton, Maryland, on November 22, 2016.  Specifically, the evidence proved that the robbers entered the business brandishing firearms and ordered two employees to get on the ground.  The defendants took money from the victims’ pockets and then ordered them into the front office.  One victim was then bound with zip ties and gagged with duct tape.  The second victim fought, was shot by the robbers, and ultimately paralyzed.  The robbers then fled in a vehicle they had stolen earlier that day.

As detailed at trial, on November 26, 2016, the defendants robbed a barbershop in Seat Pleasant, Maryland.  According to the trial testimony, the two defendants entered the business, ordered everyone to the ground and then robbed them.  During the robbery, the defendants threatened the victims with violence.  According to the evidence, the robbers put the cash in a dark single strap duffle bag and fled in a stolen minivan.  Police saw the minivan at a traffic light and attempted to stop the vehicle but the driver refused to stop, fleeing into Washington, DC.  Three individuals exited the vehicle and attempted to run away.  The driver and Lewis were captured.  The third person, later identified as Hill, escaped but was apprehended later.

Police searched Lewis after his arrest and recovered his cell phone.  From the floor of the minivan, Metropolitan Police officers recovered two loaded 9 millimeter handguns, one with an obliterated serial number.

Further, the evidence proved that after the robberies, and while he was detained, Lewis called several people from jail and asked them to visit the victims of the barbershop robbery to persuade them not to cooperate in the investigation, including not testifying before the federal grand jury.

Judge Hazel has scheduled sentencing for Hill on March 11, 2020, at 2:00 p.m.  Lewis and Hill have been detained since their arrests on the federal charges.