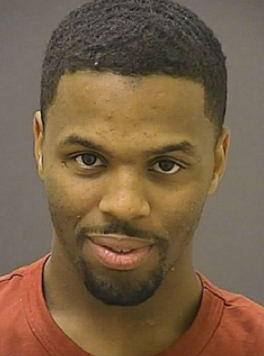 Roger Taylor, a/k/a Milk, age 28, of Baltimore, pleaded guilty today to the federal charges of conspiring to participate in a violent racketeering enterprise known as Trained To Go (TTG), and to conspiracy to possess with intent to distribute controlled substances.  Taylor, a fugitive since July 2017, was arrested on June 30, 2019.  The racketeering activities to which Taylor pleaded guilty are: narcotics distribution and robberies of other individuals, including rival drug dealers and gang members in TTG territory.
In a related case, on January 31, 2020, John Lewis Harrison, a/k/a Binky, age 29 and Taurus Tillman, age 30, a/k/a Tosh, both of Baltimore, Maryland, pleaded guilty to the federal charge of assaulting employees of the U.S. Marshals Service (USMS) while they were detained and being transported to and from the courtroom during their trial.
Roger Taylor and his fellow gang members brought violence and misery to West Baltimore, in the form of murders, armed robberies, and drug dealing.  After his capture as a fugitive from justice, Taylor will now likely spend over a decade in federal prison,” said U.S. Attorney Robert K. Hur.  “Criminals who are terrorizing our neighborhoods should be deterred by the reality of years spent in a federal prison far from home—where there is no parole.  Ever.”
According to his plea agreement, Taylor was associated with a drug trafficking organization that operated in the Sandtown neighborhood of West Baltimore.  As part of the conspiracy, each defendant agreed that a conspirator would commit at least two acts of racketeering activity.  Taylor was self-identified member of a group, known as the “Young Go Getters” (YGG), which assisted members and associates of the criminal enterprise in their activities.  As of 2014, the organization became known as “Trained To Go” or “TTG.”
As detailed in his plea agreement, Taylor, who referred to himself as YGG Milk, along with other members of YGG, provided support to TTG in the form of money, drugs, and other assistance.  For example, on January 22, 2016, law enforcement learned that two members of TTG were looking for several individuals that had robbed a member of TTG of a small quantity of narcotics.  The two members of TTG were spotted by law enforcement driving in the area of the 2500 block of West Lafayette Avenue in west Baltimore.  In an effort to escape the police, the occupants of the car fled after crashing into a snow bank.  Investigation revealed the car had been provided to them by Taylor.
On August 10, 2015, Postal Inspectors interdicted four packages addressed to a fictitious addressee in Windsor Mill, Maryland.  Because the address was also a false address, the packages could not be delivered.  Taylor, in an effort to obtain the packages, contacted the post office and requested the packages be re-delivered to a different address in Windsor Mill.  Additional investigation revealed that the four packages contained 9.9 kilograms of cocaine.
During the course of the conspiracy, the quantity of cocaine within the scope of Taylor’s agreement with his co-conspirators and reasonably foreseeable as to Taylor was equivalent to between 15 and 50 kilograms of cocaine.
Taylor and the government have agreed that, if the Court accepts the plea agreement, Taylor will be sentenced to between 11 and 14 years in federal prison.  U.S. District Judge Catherine C. Blake has scheduled sentencing for April 1, 2020.
The leader of the gang, Montana Barronette, a/k/a Tana, and Tanner, age 23, and his brother, Terrell Sivells, a/k/a Rell, age 27, both of Baltimore, were each sentenced to life in prison on February 15 and April 26, 2019, respectively.  Co-defendants Brandon Wilson, a/k/a Ali, age 24, and Taurus Tillman, a/k/a Tash, age 30, both of Baltimore, were each sentenced to 25 years in prison on March 1 and May 21, 2019, respectively.  Two other co-defendants, John Harrison, a/k/a Binkie, age 28, and Linton Broughton, a/k/a Marty, age 25, both from Baltimore, were sentenced to life in prison and to 30 years in prison, respectively, on March 15, 2019.  Three other TTG members previously pleaded guilty and were sentenced to between five and 25 years in prison.
As detailed in the plea agreements of Harrison and Tillman, from September 17, 2018 through October 31, 2018, a criminal trial was held in U.S. District Court in Baltimore, in the matter of United States v. Barronette, et al.  Harrison and Tillman were both defendants in the case and were detained before and during the trial.  During the trial, members of the U.S. Marshals Service were responsible for transporting the defendants, including Harrison and Tillman, to and from the courtroom.
Harrison and Tillman admitted that on September 21, 2018, they assaulted two Deputy U.S. Marshals and a U.S. District Court Security Officer as they were being escorted from the courtroom during a break in the trial.
Tillman was immediately sentenced to one year in federal prison, consecutive to the 25 years he is already serving for the racketeering conspiracy.  U.S. District Judge Catherine C. Blake has scheduled sentencing for Harrison on April 29, 2020.