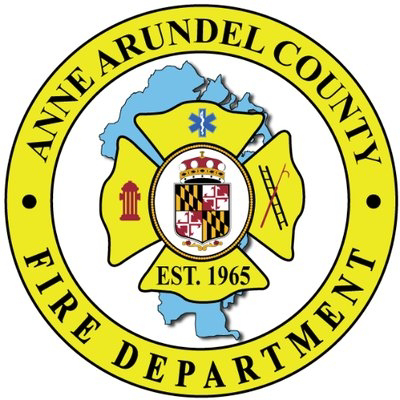 Anne Arundel County Fire officials say a family of four has been displaced and a first responder was injured following a fire in Severn.
At about 4pm on Saturday, firefighters responded to 9-1-1 calls from the occupants and neighbors reporting the deck and the back of a home on fire in the 1800 block of Cedar Drive. The first arriving firefighters reported heavy fire conditions from the rear of the home and that a recreational vehicle was also involved in the fire. Forty-three firefighters from Anne Arundel County, Fort Meade Fire, and Emergency Services, and the Baltimore/Washington International Thurgood Marshall Airport (BWI) Fire & Rescue Department brought the fire under control in about 40 minutes.
The Red Cross is assisting four adult occupants who have been displaced. A firefighter from Fort Meade Fire and Emergency Services suffered a minor ankle injury while moving a hose line and was transported to UM Baltimore Washington Medical Center for treatment. Paramedics evaluated an occupant with a hand injury on the scene but did not require transport to the hospital. The cause of the fire is under investigation by members of the Anne Arundel County Fire Department Fire and Explosives Investigation Unit.