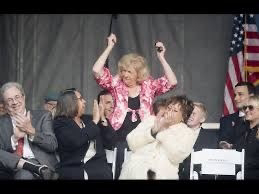 On Monday, February 3, 2020, Pauline Brosnan, mother to Annapolis Mayor Gavin Buckley, passed away after a battle with cancer. Mayor Buckley traveled to Fremantle, Australia last week. He was able to spend the final few days at her bedside.
She is survived by husband Terry Brosnan and sister Annette Butler. She is predeceased by Paul Buckley, the twin brother of Gavin. Paul died from an undiagnosed medical condition at age 14.
Pauline Brosnan was born February 22, 1942 in Limerick, Ireland. She moved to London at a young age and grew up in the area of Wimbledon.  She married in her early 20s and moved to South Africa where sons Gavin and Paul were born. The family later emigrated to Fremantle, Australia.
Pauline made several trips to the USA, including a trip to attend Mayor Buckley’s inaugural ceremony in December of 2017. She was photographed by the New York Daily News pumping both fists in the air after he was sworn in.
“She was always in my corner and I will miss her dearly,” Mayor Buckley said.
The Mayor will remain in Australia for the burial this week. He will return to Annapolis on February 11, 2020. Alderwoman Rhonda Pindell Charles has been designated Acting Mayor in his absence.
A Registry Book is in the lobby of City Hall (160 Duke of Gloucester Street, Annapolis) for those who would like to offer a condolence message to Mayor Buckley.