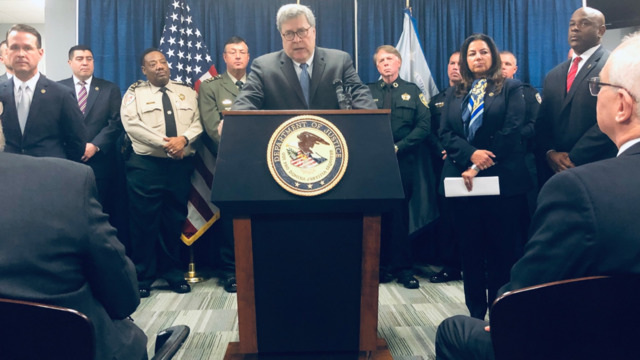 “Gun crime remains a pervasive problem in too many communities across America,” said Attorney General Barr. “The Department of Justice is redoubling its commitment to tackling this issue through the launch of Project Guardian. Building on the success of past programs like Triggerlock, Project Guardian will strengthen our efforts to reduce gun violence by allowing the federal government and our state and local partners to better target offenders who use guns in crimes and those who try to buy guns illegally.”

“We are committed to working with our federal, state, and local law enforcement partners to get guns off of our streets, in order to reduce violent crime in our neighborhoods,” said Robert K. Hur, U.S. Attorney for the District of Maryland. “If you use a gun, you could face federal time, where there is no parole—ever.  Please, put down the guns and save a life—maybe even your own.”

Reducing gun violence and enforcing federal firearms laws have always been among the Department’s highest priorities. In order to develop a new and robust effort to promote and ensure public safety, the Department reviewed and adapted some of the successes of past strategies to curb gun violence. Project Guardian draws on the Department’s earlier achievements, such as the “Triggerlock” program, and it serves as a complementary effort to the success of Project Safe Neighborhoods (PSN). In addition, the initiative emphasizes the importance of using all modern technologies available to law enforcement to promote gun crime intelligence.

“Working together with our federal and local partners is key to reducing gun violence and violent crime in the region,” said Jessie K. Liu, U.S. Attorney for the District of Columbia. “Project Guardian will allow us to identify specific incidents and trends, thereby enabling us to move quickly in investigating and prosecuting violent crime in the most appropriate venue. The correlation between the availability and use of illegal guns and violent crime is undeniable, and we will continue to work closely with our partners in the law enforcement community in the promotion of public safety and the pursuit of justice. “

“The public is on notice that we are deadly serious about illegal firearms offenses,” said G. Zachary Terwilliger, U.S. Attorney for the Eastern District of Virginia. “Now with leadership of Attorney General Barr, all the tentacles of the Department of Justice, including the ATF and its Crime Gun Intelligence capabilities, and the amazing men and women in blue on the beat, we are doubling down on illegal firearms with Project Guardian.”

“Through this partnership, we hope to stanch the flow of illegal guns from the Commonwealth of Virginia to Washington, Baltimore, and other cities in the Northeast, where, too often, they are used to commit violent crimes,” said Thomas T. Cullen, U.S Attorney for the Western District of Virginia.  “We will work closely with our U.S. attorney partners, the ATF, the MPD, and the Virginia State Police to identify individuals and groups in Western Virginia engaged in this deadly enterprise and put them in federal prison.”

“Criminals do not concern themselves with state line or jurisdictions, so we have ensured that our efforts to stop the illegal flow of guns into Maryland involves working closely with our neighboring ATF Field Division in Washington, as well as neighboring U.S. Attorney’s Offices in Virginia and D.C.,” said Rob Cekada, Special Agent in Charge of ATF Baltimore Field Division. “Our focus is on identifying, investigating, and incarcerating anyone who uses firearms to commit violent crime, and those who traffic or straw purchase firearms are supplying these offenders. Project Guardian serves to further strengthen our multi-state and District partnerships with law enforcements and prosecutors so we can brings these criminals to justice.”

“Straw purchasers and firearms traffickers do more than commit paperwork violations or illegally sell a firearm – they knowingly put firearms in the hands of people who should not have them, including violent offenders. These traffickers have no regard for the safety of D.C., Maryland, and Virginia communities,” said Ashan M. Benedict, Special Agent in Charge of ATF’s Washington Field Division. “As part of Project Guardian, ATF will continue to work alongside our local, state, and federal law enforcement partners and U.S. Attorney’s Officers to ensure anyone committing these crimes is held accountable. We are putting all gun traffickers on notice that we will find you; you will be held accountable; and you will be punished under the law.”

Project Guardian’s national and DMV implementation is based on five principles:

Coordinated Prosecution. Federal prosecutors and law enforcement will coordinate with state, local, and tribal law enforcement and prosecutors to consider potential federal prosecution for new cases involving a defendant who: a) was arrested in possession of a firearm; b) is believed to have used a firearm in committing a crime of violence or drug trafficking crime prosecutable in federal court; or c) is suspected of actively committing violent crime(s) in the community on behalf of a criminal organization.

Enforcing the Background Check System. United States Attorneys, in consultation with the Special Agent in Charge of the Bureau of Alcohol, Tobacco, Firearms and Explosives (ATF) in their district, will create new, or review existing, guidelines for intake and prosecution of federal cases involving false statements (including lie-and-try, lie-and-buy, and straw purchasers) made during the acquisition or attempted acquisition of firearms from Federal Firearms Licensees.
Particular emphasis is placed on individuals convicted of violent felonies or misdemeanor crimes of domestic violence, individuals subject to protective orders, and individuals who are fugitives where the underlying offense is a felony or misdemeanor crime of domestic violence; individuals suspected of involvement in criminal organizations or of providing firearms to criminal organizations; and individuals involved in repeat denials.

Improved Information Sharing. On a regular basis, and as often as practicable given current technical limitations, ATF will provide to state law enforcement fusion centers a report listing individuals for whom the National Instant Criminal Background Check System (NICS) has issued denials, including the basis for the denial, so that state and local law enforcement can take appropriate steps under their laws.

Crime Gun Intelligence Coordination. Federal, state, local, and tribal prosecutors and law enforcement will work together to ensure effective use of the ATF’s Crime Gun Intelligence Centers (CGICs), and all related resources, to maximize the use of modern intelligence tools and technology. These tools can greatly enhance the speed and effectiveness in identifying trigger-pullers and finding their guns, but the success depends in large part on state, local, and tribal law enforcement partners sharing ballistic evidence and firearm recovery data with the ATF.