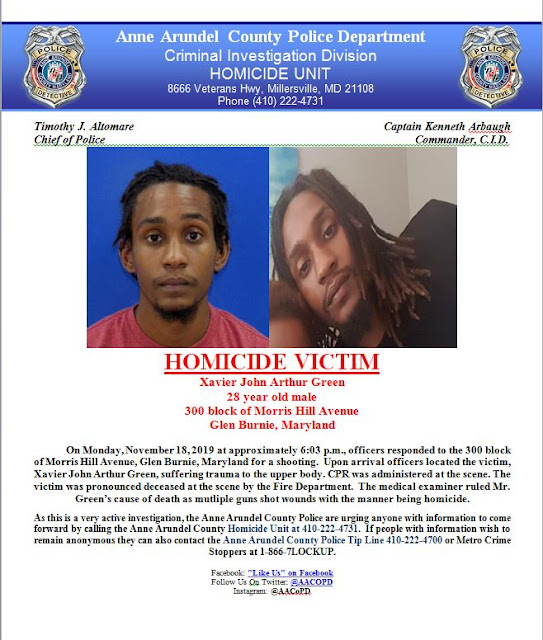 Anne Arundel County Homicide detectives along with the Evidence Collection Unit responded and processed the crime scene. Several pieces of evidence were collected along with interviews of multiple witnesses. Anne Arundel County Air and K-9 Units assisted with the search for any potential suspects at that time.

On Tuesday, November 19, 2019, the Office of the Chief Medical Examiner performed an autopsy on Mr. Green. The OCME ruled Xavier Green’s cause of death as multiple gunshot wounds with the manner being homicide. Homicide detectives responded back out to the scene today in an effort to locate more witnesses to the crime as well as digital evidence. The shooter is described as an African American male wearing a light colored shirt with dark pants.  The Anne Arundel County Police is urging anyone with information on this incident or the suspect to contact the Anne Arundel County Homicide Unit at 410-222-4731. Individuals wishing to remain anonymous may call the Anne Arundel County Tip Line 410-222-4700 or Metro Crime Stoppers.