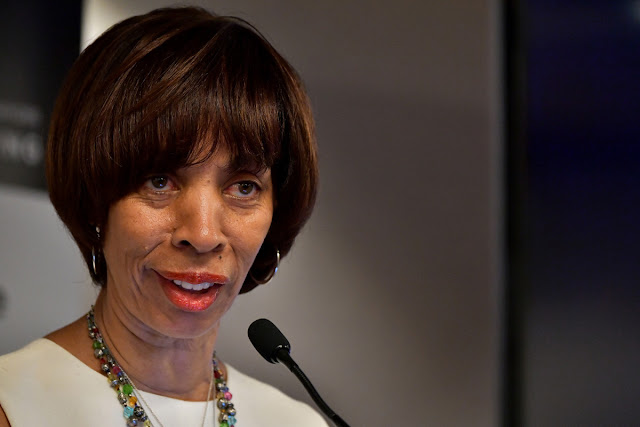 A federal grand jury has indicted Catherine Elizabeth Pugh, age 69, of Baltimore, Maryland, on the federal charges of conspiracy to commit wire fraud, seven counts of wire fraud, conspiracy to defraud the United States, and two counts of tax evasion.  The indictment was returned on November 14, 2019, and was unsealed today. Catherine Pugh is scheduled for an initial appearance and arraignment in U.S. District Court in Baltimore before U.S. District Judge Deborah K. Chasanow on November 21, 2019 at 1:00 p.m.  Pugh is expected to self-surrender to the U.S. Marshals prior to the hearing on November 21st.

“Our elected officials must place the interests of the citizens above their own,” said United States Attorney Robert K. Hur. “Corrupt public employees rip off the taxpayers and undermine everyone’s faith in government.  The U.S. Attorney’s Office and our law enforcement partners will zealously pursue those who abuse the taxpayers’ trust and bring them to justice.”

“The people of Maryland expect elected officials to make decisions based on the public's best interests, not to abuse their office for personal gain,” said Special Agent in Charge Jennifer Boone of the FBI's Baltimore Division.  “The indictment alleges that Catherine Pugh betrayed the public's trust. The FBI will continue to diligently work to detect fraud and corruption and hold those who violate this trust accountable.”

“Public officials should be a role model for the citizens they serve - adhering to the highest of standards,” said IRS-CI SAC Kelly Jackson. “These individuals chose to evade payment of their fair share of taxes instead, actions for which they must be held accountable in order to preserve public trust and confidence.”

According to Pugh’s 11-count indictment, from approximately 2007 through 2016 Pugh served in the Maryland State Senate, where she served on various legislative committees, including the Senate Health Committee.  In 2011, Pugh ran an unsuccessful campaign to be mayor of Baltimore.  In September 2015, Pugh again ran for mayor of Baltimore, and won, becoming Mayor on December 6, 2016.  Pugh owned Healthy Holly, LLC, a company formed in Maryland on January 14, 2011, and used to publish and sell children’s books she had written.  Pugh also owned Catherine E. Pugh and Company, Inc., a marketing and public relations consulting company organized in Maryland in 1997.  The principal address for both companies was Pugh’s residence in Baltimore.  Pugh was also the sole signatory on the Healthy Holly and Pugh Company bank accounts.  Pugh did not maintain a personal bank account, using her business bank accounts for personal and business finances.

As stated in the indictment, between June 2011 and August 2017, four Healthy Holly books were published, with each book listing “Catherine Pugh” as author.  The vast majority of books published by Healthy Holly were marketed and sold directly to non-profit organizations and foundations, many of whom did business or attempted to do business with the Maryland and Baltimore City governments.

The indictment alleges that from November 2011 until March 2019, Pugh conspired with Gary Brown to defraud purchasers of Healthy Holly books in order to enrich themselves, promote Pugh’s political career, and fund her campaign for mayor.  The indictment alleges that the conspirators employed several methods to defraud, including: not delivering books after accepting payments for the books; accepting payments for books to be delivered to a third party on behalf of a purchaser, then converting some or all of the purchased books to their own use without the purchaser’s or third party’s knowledge; and by double-selling books without either purchaser’s knowledge or consent.  Pugh allegedly stored quantities of fraudulently obtained Healthy Holly books at various locations, including Pugh’s residence, her state legislative offices, her mayoral office, and a public storage locker used by Pugh’s mayoral campaign.  The indictment alleges that Pugh used the proceeds of the sale of fraudulently obtained Healthy Holly books for her own purposes, including: to fund straw donations to Pugh’s mayoral election campaign; and to fund the purchase and renovation of a house in Baltimore City.

Further, the indictment alleges that Pugh issued Healthy Holly checks payable to Brown, for the purpose of funding straw donations to the Committee to Elect Catherine Pugh.  The indictment alleges that Brown cashed the checks and used the untraceable cash to fund money orders, debit cards, and personal checks in the names of straw donors totaling approximately $35,800.  The straw donations purchased with the cash were allegedly then deposited into the bank account of the Committee to Elect Catherine Pugh.  The indictment alleges that Pugh wrote additional Healthy Holly checks to Brown totaling $26,300, which he cashed and gave the cash to Pugh.  On January 11, 2017, Brown was charged with, and ultimately convicted of, violating Maryland’s election laws for funneling $18,000 of the straw donations to Pugh’s campaign. The Committee to Elect Catherine Pugh issued five checks in the names of three of the straw donors, with a notation in the memo line on each check stating “returned contribution.” The indictment alleges that none of the straw donors received any of the returned money, and instead, at Pugh’s direction, Brown used the money to pay for his legal defense.

In addition, the indictment alleges that Pugh conspired to evade taxes on the income received from the sales of Healthy Holly books.  The indictment alleges that to accomplish this, Pugh concealed from the IRS the fact that she created false business expenses to offset the income she received from the sale of books by issuing Healthy Holly checks to Brown for services and/or products purportedly supplied by his company.  Pugh allegedly filed false income tax returns for 2016 and 2015, in which she underreported her income.  For example, the indictment alleges that for tax year 2016 Pugh claimed her taxable income was $31,020 and the tax due was $4,168, when in fact, Pugh’s taxable income was $322,365, with an income tax due of approximately $102,444.

According to Gary Brown’s plea agreement, from November 2011 until March 2019, he conspired with Catherine Pugh to fraudulently sell and distribute tens of thousands of Healthy Holly books.  Brown admitted that over that period they executed the scheme in three ways: by selling the books, keeping the money and not delivering the books; provided books to purchasers, but later converted them to their own use at campaign events and government functions; and resold books that had previously been purchased and donated to the Baltimore City Public Schools.

Brown Conspiracy with Pugh to Defraud the United States

Further, as detailed in his plea agreement, Brown cashed checks Pugh wrote to him from the Healthy Holly account, then used the cash to fund money orders, debit cards, and personal checks in the names of straw donors, which were then submitted to the Committee to Elect Catherine Pugh.  Brown also admitted that he cashed some of the Healthy Holly checks and gave the cash to Pugh.  To conceal the straw-donation scheme and avoid paying taxes that might result from the scheme, Pugh and Brown provided false information to the IRS regarding the purpose of the Healthy Holly checks.

Brown and Wedington both admitted that they conspired to avoid tax withholdings from Wedington’s payroll checks while Wedington was the Executive Director of the Maryland Center for Adult Training (MCAT) and Brown was the Chairman of the Board of Directors.  Specifically, in 2013, Wedington’s salary was garnished due to outstanding student loan debt and medical bills.  In order to avoid further garnishments, Wedington asked Brown to take her “off payroll,” which meant that MCAT would no longer submit her name to the payroll service provider for the purpose of calculating taxes to be withheld from her salary.  Brown agreed to the arrangement and had MCAT make electronic deposits into his personal bank account in an amount that exceeded the annual salary owed to Wedington, creating the pretense that he was doing work for MCAT as an independent contractor.  Brown then wrote checks to Wedington and/or gave her cash equal to or greater than her salary, which was more than $80,000 per year.  No taxes were withheld from the funds Brown paid to Wedington, nor did her salary go through Wedington’s bank account, where it could be garnished.  In addition, Brown prepared fraudulent tax returns for Wedington for tax years 2013 through 2017, which did not report Wedington’s MCAT income and made a variety of false entries, resulting in refunds to which Wedington was not entitled and avoiding over $121,000 in total taxes due and owing.  Brown also filed a false individual income tax return for tax year 2016 for himself, which falsely listed the $64,325 of Healthy Holly payments as business income.  In addition, from 2016 through 2018, Brown worked part-time as a freelance tax preparer and charged a fee to prepare dozens of tax returns that he filed on behalf of his family, friends, and associates.  Brown included false information in all of those tax returns in order to obtain larger refunds for his customers.  The fraudulently obtained refunds totaled more than $100,000.