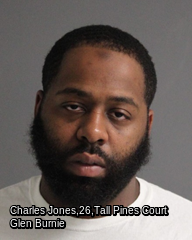 On October 7, 2019 detectives conducted surveillance in the 7800 block of Tall Pines Court. Detectives approached Mr. Jones and were able to detain him without incident. Once Mr. Jones was in custody, detectives executed the search warrant on his apartment and recovered the following;

5.63 grams of crack cocaine
$2,700.00 U.S. Currency
A box of plastic baggies
An operable digital scale with residue
A box of 9mm ammunition

Detectives contacted the Maryland Gun Center, which advised Mr. Jones is prohibited from possessing firearms and or ammunition.

This investigation was a coordinated effort between the Anne Arundel County Police Department and the Maryland Department of State Police under the Maryland Criminal Intelligence Network (MCIN). The Governor’s Office of Crime Control and Prevention (GOCCP) provides grant funding and strategic support to MCIN member sites to identify, disrupt, and dismantle criminal organizations through inter-agency collaboration and data sharing to make Maryland safer.