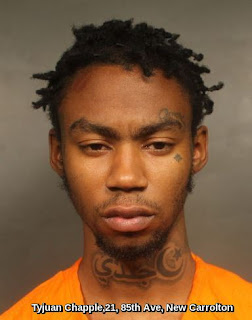 On September 23, 2019 at approximately 8:30 p.m., officers responded to the area of Irving Street and Laurel Fort Meade Road in Laurel for a shooting that occurred in Anne Arundel County. Upon arrival officers located the adult male victim who told officers he was standing outside in the 200 block of Red Clay Road when he was shot in his lower torso.

The victim was transported to an area hospital with non-life threatening injuries.

Through the investigation a suspect was identified and an arrest warrant was obtained charging the suspect with the shooting. The suspect was apprehended on the warrant last evening and is currently in custody.

This is an active and ongoing investigation. The Western District Detective Unit is investigating this shooting and are asking anyone with information to contact 410-222-6155 or the TipLine at 410-222-4700.