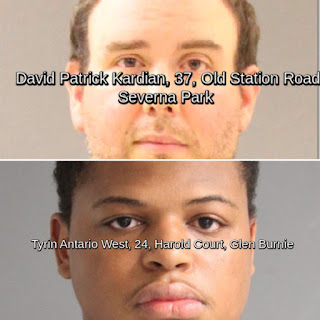 The Anne Arundel County Police Child Abuse Unit has been conducting investigations into child pornography allegations over the past several months. This week culminated with the investigations being closed by two separate arrests.

The first investigation was initiated o n January 22, 2019, when the Child Abuse Unit began an investigation in reference to a report of a specific account that was directly associated in uploading child pornographic images to a particular internet site. The information was provided by the National Center for Missing and Exploited Children (NCMEC).
As the result of issuing and executing several court orders, detectives identified an address involved with uploading child pornography. On April 19 th , 2019 detectives executed a search warrant at an address in the unit block of Old Station Road in Severna Park. The suspect, identified as David Patrick Kardian, a thirty-seven year-old male of the same address was on scene and interviewed. Several electronic items that belonged to the suspect were seized and later examined by the Anne Arundel County Digital Forensics Lab.

The forensic download of the suspect's electronic devices provided detectives with corroborating evidence of child pornography. On October 7 th , 2019, Child Abuse detectives obtained an arrest warrant for David Kardian charging him with 13 counts of possession of child pornography. On October 7 th , 2019, the suspect, David Kardian was arrested without incident.

On March 13 th 2019, Special Agents with the Federal Bureau of Investigation (FBI) along with Anne Arundel County Police detectives assigned to the Child Abuse Unit executed a residential search and seizure warrant located in the 8100 block of Harold Court in Glen Burnie. The search warrant was in reference to the on-going FBI investigation regarding the possession of child pornography. The investigation originated in the state of Florida and as it progressed, investigators were led to the suspect’s address located on Harold Court in Glen Burnie, Maryland.

Upon arrival, Agents and Detectives made entry as the suspect who was identified as Tyrin Antario West, a twenty-four year-old male of the same address was on scene and later interviewed. Numerous digital electronics were confiscated and submitted as evidence as they were later examined by forensic investigators with the FBI. The forensic download of the suspect's electronic devices provided detectives with corroborating evidence as numerous videos and images depicting child pornography were discovered.