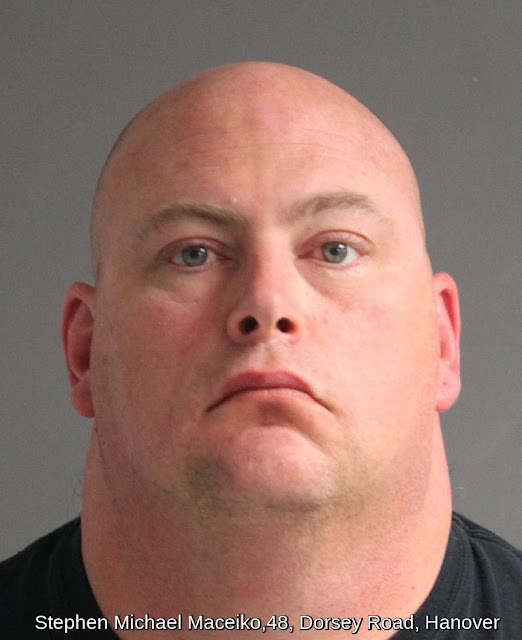 On January 9th, 2019, the Anne Arundel County Child Abuse Unit initiated an investigation in reference to a report of a specific account that was directly associated in uploading child pornographic images to a particular internet site. The information was provided by the “National Center for Missing and Exploited Children” (NCMEC) which is a non-profit organization whose mission is to find missing children, reduce child sexual exploitation and prevent child victimization.

As the result of issuing and executing several court orders, detectives identified an address involved with uploading child pornography. On May 9th, 2019 detectives executed a search warrant at an address in the 7000 block of Harmans Road in Hanover Maryland. The suspect, identified as Stephen Michael Maceiko, a forty eight year old male of the same address was on scene and interviewed.

While interviewing the suspect, it was learned that his place of employment is the Ruth Parker Eason School located in the 600 block of Old Mill Rd, Millersville, Maryland. An official with the Board of Education was notified of the ongoing investigation and the suspect was removed from the school in order that he would not have any interaction with children while the investigation remained open.  At this time, detectives have no knowledge of any Ruth Parker Eason student being depicted in images recovered from the suspect.

Several electronic items that belonged to the suspect were seized and examined by the Anne Arundel County Digital Forensics Lab. The forensic download of the suspect's electronic devices provided detectives with corroborating evidence as numerous videos and images depicting child pornography were discovered.

On October 15th, 2019, Child Abuse detectives obtained an arrest warrant for Stephen Maceiko for (5) counts of promotion/distribution of child pornography and (13) counts of possession of child pornography. On October 15th, 2019, Stephen Maceiko was arrested without incident and is currently incarcerated at the Anne Arundel County Detention Center on a no bond status.

In a written statement obtained by Report Annapolis, Schools Spokesman Bob Mosier said Maceiko was removed from his position immediately upon the school system receiving the first allegation last May and has had no contact with students since.

"Like all employees, Mr. Maceiko is entitled to due process," Mr. Mosier said.  "We will take further action with regard to his employment status as soon as administratively possible."