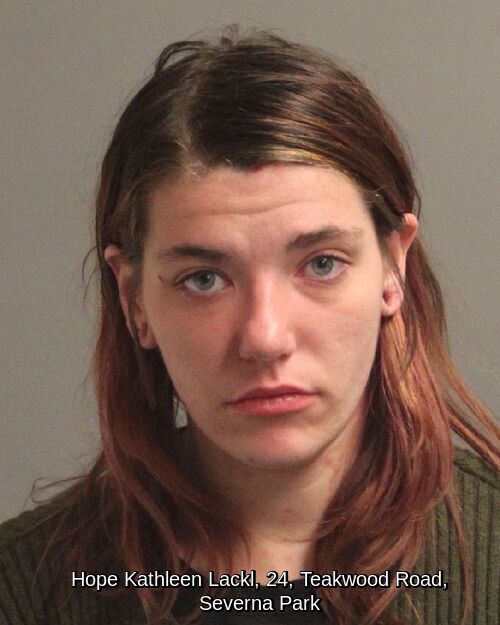 On October 17, 2019 at approximately 1:30 a.m. officers observed a vehicle commit a traffic violation and a traffic stop was initiated on Franklin Avenue at Ritchie Highway in Brooklyn. During the stop, the officers observed a small amount of suspected crack cocaine and drug paraphernalia in plain view. Further searches of the vehicle and occupants yielded just over 21 grams of suspected crack cocaine, a digital scale and a Walther .380 semi-automatic handgun. Also seized was over $1,600 in US Currency.

Among those arrested and charged was Hope Kathleen Lackl, 24, of 800 Teakwood Road in Severna Park. Ms. Lackl was charged with 10 counts, CDS: Poss Paraphernalia, CDS Distr w/ Firerarm and Firearm/Drug Traf Crime. Lackl has a significant criminal background. In February of this year, Ms. Lackl was sentenced to more than two months in jail after pleading guilty to one count of prostitution.