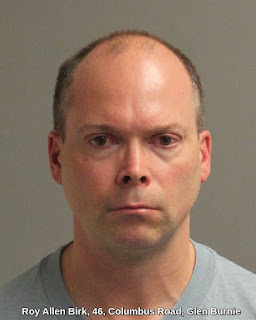 On the evening of Tuesday, October 1, officers from the northern district of the Anne Arundel County Police Department responded to reports for destruction of property on Columbus Road in Glen Burnie.

As officers were arriving on the scene, a call came in from an area hospital to report that a minor had been the victim of a shooting and was brought in to their facility for treatment . The  victim, a 15 year old boy, stated he had been shot on Columbus Road. Offices investigating each incident were able to determine that the first call came in from Mr. Roy Allen Birk. During an interview with officers, Birk stated that he heard a "loud noise" outside near the area where his vehicle was parked.  Birk subsequently admitted to firing his handgun from the inside of his home, striking the child one time in the upper body.

Although the suspect was legally permitted to own the firearm, he was later arrested and charged with attempted first degree-felony murder and several other offenses, including: felony assault and reckless endangerment.  Mr. Birk is currently being held without bail at the Anne Arundel County Detention Center.  A bail review is scheduled for Thursday morning at the Annapolis District Court.