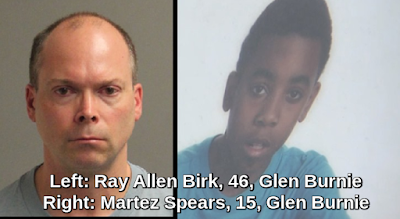 The mother of Glen Burnie shooting suspect Roy Allen Birk spoke exclusively with Report Annapolis, regarding an incident she says has shocked their entire family.

"My son is no monster," his mother said.  She classified what happened as a "knee jerk reaction" to a long history of ongoing problems with the children in his neighborhood.

Birk, 46, of Columbus Road in Glen Burnie, was arrested and charged on Tuesday night after allegedly shooting and injuring his 15 year old neighbor, Martez Spears.

Officers with the Anne Arundel County Police Department were responding to Birk's home for report of suspected destruction of property, when an area hospital notified them that a 15 year old shooting victim had been brought to their facility. During an interview with officers, Mr. Birk reportedly stated that he had heard a "loud noise" outside near the area where his vehicle was parked.  Birk subsequently admitted to firing his handgun from the inside of his home, striking the child one time in the upper body. He was later arrested and charged with attempted first degree-felony murder and several other offenses, including: felony assault and reckless endangerment.  Mr. Birk is currently being held without bail at the Anne Arundel County Detention Center. A preliminary hearing is scheduled in the case for October 29 in Annapolis.

Roy Birk, an analyst for the Department of Defense, moved into his home in April of 2008.  Prior to that, Mr. Birk served in the United States Navy for about 6 years.  Both of Birk's parents are veterans-having served in the Army.  "He is a good man and comes from a good family," said Ms. Birk.  "This entire family is absolutely shocked by what has taken place with Roy."

Birk's mother said her son has had problems out of the children in his community regularly since he purchased his home more than 10 years ago.  "This has been an on going problem since he moved there,"  she said. "The teenagers in his neighborhood have slit his tires, shot bb guns through his house and made it difficult for him to even walk his own dog."

"Yes, I think I’m better than you. So what are you going to do about it?"

Roy Birk is certainly known to his close friends and family as being outspoken.  He uses an online blog as an outlet for airing his life's stressors and rants.

The blog ran by birk, Rabirk.net, is titled perfectly "My Place to vent."  Most of the entries on the site seem to be relentlessly prosaic and hackneyed, although somewhat illustrative of the interactions he has had in the past with the children in his neighborhood.

An entry on the blog site dated August 12, 2019, includes Mr. Birk's extremely candid account about being awakened from a nap to find that someone had shot through his home with a bb gun for the third time:

"Just waking up from a nap on the couch, I heard a brief, sharp noise, a noise I’ve heard before. That time, it was due to BBs being shot through a window. Why would somebody do such a thing? Is it because I’m going around shooting out people’s windows? No, I’ve never shot a BB gun, or anything, for that matter, into anybody’s window or any part of their house. Yet this is the third such incident I’ve faced in the eleven years I’ve been in my house."

Later in the blog entry, Birk writes about a conversation he had with one of the African American children in the neighborhood:

"I told a black teenager who’d just told me he was going to shoot me and my dog (for no reason) that when black teenagers are shot, lots of people just don’t care. (Mean, but there’s surely an element of truth there.)  Wouldn’t that just prove that I’ve been right to consider him an ignorant redneck? (Is there a separate term for black men who behave like rednecks?)  Yes, I am in the right. I’m better than this pathetic asshole."

In a separate entry dated December 23, 2018, Birk appeared to show great disdain for Christianity and any other group that doesn't subscribe to or acknowledge the Atheist belief system:

"Christians believe this child was the son of God and went on to give his life to forgive original sin. The Jews disagree. So do I. As with any matter of religion, people choose willy-nilly which story they will believe. Then again, it isn’t so willy-nilly. If you grow up Muslim or around Muslims, you might believe the palm tree story. If you grow up in a Christian environment, you might believe the manger story. To assert that any one story is right and the others are wrong would be an act of gross arrogance.  Arrogance, yes, but also ignorance."

In that same December 23 entry, Mr. Birk became extremely explicit about his thoughts regarding a colleague of the Morman faith:

"All missionaries deserve to get shot dead by arrows.  Face it, true believers are arrogant. I’ve been working with a Mormon colleague lately, and we get into some serious discussions. I told my Mormon colleague of the Latina woman on the street who, out of the blue, looked at me and said, “Jesus loves you.” I said that if that happens again, I’ll likely respond, “That’s bullsh*t, but you can believe it if you want to.” The Mormon asked why I can’t respond more politely, just saying “Thank you,” and I said that if other people choose to shove their religious beliefs in my face, I should have the right to respond in kind.  I have tried not to be overly arrogant in my dismissal of his religious beliefs, but lately I might have slipped a little more toward negativity. I said a couple of times in his presence that “conservatives” are all about taking freedom away from Americans and they won’t be happy until every American is kneeling in prayer by their bedside every night. I said these words mockingly while mimicking hands folded innocently in prayer."

When asked about these entries on his site, Birk's mother, a catholic, doubled down on the assumption that her son was racist or prejudice. "Roy is not racist and he is not prejudice...against anyone," she said.

Calls and emailed requests for comment from the Department of Defense have not yet been returned.