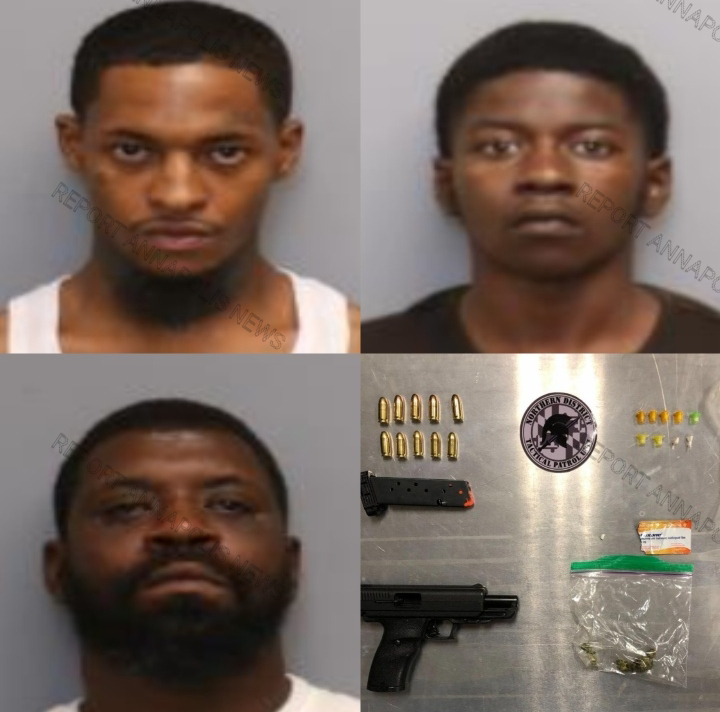 Police officers pulled over a vehicle in Brooklyn Park and subsequently arrested three people after locating drugs and a loaded weapon.
On July 28, 2021 at approximately 1:00 a.m., the officers conducted a traffic stop on a silver Acura in the area of 6th Street and Disney Avenue. The driver and one passenger exited the vehicle in an attempt to flee, and one additional passenger remained with the vehicle. After a brief foot pursuit, the fleeing subjects were apprehended.
Officers saw a High-Point .45 caliber handgun on the driver’s seat. The handgun was loaded with 10 rounds of ammunition. The driver was found to be in possession of a small amount of Oxycodone Hydrochloride. The driver was also found to have an outstanding warrant through Baltimore City for armed carjacking.
One passenger was found to be in possession of seven containers and two bags of suspected cocaine (3.5g) and suspected marijuana (1.17g). The other passenger was found to be in possession of a single Suboxone strip.
All three subjects were arrested, charged and identified as:
Teaaron Thompson (top left photo)
DOB: 11/13/1998
200 block of North Luzerne Avenue
Baltimore, Maryland
Jaques McFadden (top right photo)
DOB: 07/21/2003
4100 block of Mariban Court
Baltimore, Maryland
Taron Lydell Edwards (bottom left photo)
DOB: 07/01/1983
12000 block of Lincoln Street
Ridgely, Maryland