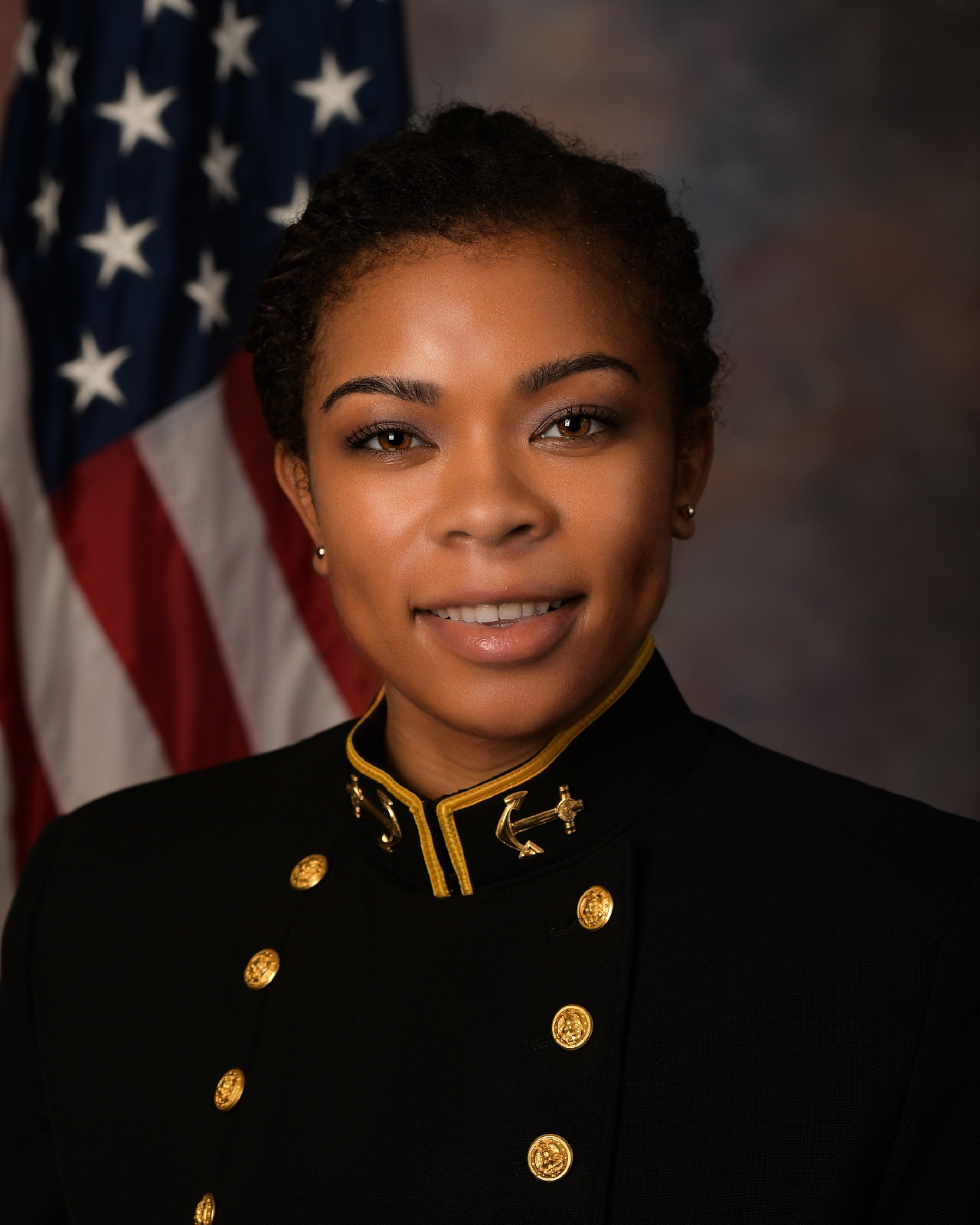 The United States Navy Academy recently announced  its  first African American female brigade commander, Midshipman 1st Class Sydney Barber, of Lake Forest, Illinois.
The brigade commander is the highest leadership position within the brigade, and is the only "six striper"-- a reference to the collar insignia worn on the midshipman uniform, the rank  of midshipman captain. The semester-long position is currently held by Midshipman 1st Class Ryan Chapman and is selected through an application and interview process by senior leadership from the Commandant's staff.
The first female brigade commander was then Midshipman 1st Class Juliane Gallina from the class of 1992, who served in the position during the fall of 1991. Barber will be the sixteenth woman selected for brigade commander in the 44 years women have been attending the  Naval Academy.
Barber, a graduate of Lake Forest High School in Illinois, is a mechanical engineering major and aspires to commission as a Marine Corps ground officer. As a walk-on sprinter and hurdler of the Navy Women’s Varsity Track and Field team, she has lettered all three years of competing and is a USNA record holder for the outdoor 4x400m relay. She is the co-president of the Navy Fellowship of Christian Athletes Club, secretary for the National Society of Black  Engineers, and a member of the USNA Gospel Choir and Midshipman Black Studies Club. Barber served as the 13th company’s executive officer this past Plebe Summer and currently serves as the brigade’s 1st regiment executive officer.
“Earning the title of brigade commander speaks volumes, but the title itself is not nearly as significant as the opportunity it brings to lead a team in doing something I believe will be truly  special,” said Barber. “I am humbled to play a small role in this momentous season of American history.”
The brigade striper selection board receives records of the top ranked first class (senior) midshipmen across the brigade for consideration for the most senior midshipman leadership positions each semester. The board’s composition is made up of the deputy commandant of midshipmen, the six battalion officers, the brigade master chief and the current brigade commander.
Records are reviewed in detail and 30 midshipmen are selected for board interviews. Each member of the board utilizes an objective assessment tool to assess each midshipman and then rank them in order. Individual board member scores are combined and a resultant  consolidated ranking is generated; Barber was the top-ranked midshipman out of this semester's  board process.
“She is a catalyst for action, a visionary, a listener, a doer, and a person driven by compassion, by faith, by a fierce sense of passion and heart full of love,” said Chapman. “Sydney is the perfect person to lead the brigade.”
Barber completed a 7-week internship with the Department of Energy’s Lawrence Livermore National Laboratory two summers ago, where she was instrumental in doing  breakthrough research on bio-electrochemical uses for carbon nanotubes. Her research in developing legislative strategies to address education disparities in minority communities earned her selection as a 2020 Truman Scholar national finalist.
“Sydney stands out amongst her peers, for not only her exemplary record, but for her clear vision of how she intends to make the world a better place and her accompanying bias for action. We were incredibly proud to have Sydney represent the Naval Academy in her Truman Scholarship interview this year,” said Lt. Cmdr. Darby Yeager, a member of the U.S. Naval Academy’s Truman Scholarship selection committee.
Barber also initiated a STEM outreach program that leverages mentoring, literature, and service lessons to serve middle school-aged girls of color, and led a team to organize the  inaugural USNA Black Female Network Breakfast to bridge the generational gap between current black midshipmen and alumni. She most recently mobilized a team of more than 180 midshipmen, faculty, and alumni to develop the Midshipman Diversity Team to promote greater diversity, inclusivity, and equity within the Brigade.
She was recently invited to speak at the regularly scheduled meeting of the Board of Visitors, the academy's congressional oversight committee. Barber discussed how she has negotiated her time as a midshipman in the COVID-19 environment, her activities as a midshipmen striper, leadership in Bancroft Hall, balancing activities over the summer and her experience at Leatherneck, the Marine Corps’ summer training in Quantico, Va.
The announcement of next semester’s leadership team was made to the Brigade of Midshipmen during the noon meal “anchor announcement,” which is currently being held  virtually due to the COVD-19 environment. Other brigade-level striper position billets announced Friday include Midshipman 1st Class Ashley Boddiford, of Oviedo, Florida., as the  brigade executive officer; Midshipman 1st Class Tristan Anderson, of Ventura, California, as the  brigade operations officer; Midshipman 1st Class Evelyn Berecz, of Downingtown, Pennsylvania., as the brigade training officer; Midshipman 2nd Class Taylor Forrester, of York,  Pennsylvania., as the brigade sergeant major; and Midshipman 2nd Class Quin Ramos, of Lafayette, Colorado, as the brigade training sergeant.
“We are the architects of our future, and every day we earn the right to carry the torch that was once lit by the heroes, pioneers, and giants who came before us,” said Barber. “I owe everything to every person who paved the way for me, so I now pour my heart and soul into blazing the trail for the generations to come.”
Word of Friday’s announcement spread quickly this past weekend after a social media post by the first Black female to graduate from USNA, Janie Mines. Mines shared a photo of Barber and commented, “This brought me to tears. This young woman, Midshipman Sydney Barber, will be the first Black Female Brigade Commander at the U.S. Naval Academy. 40 years later. Thank you, Sydney! Love you!” Mines graduated from the academy in 1980 with the first class of women, who were inducted in 1976.