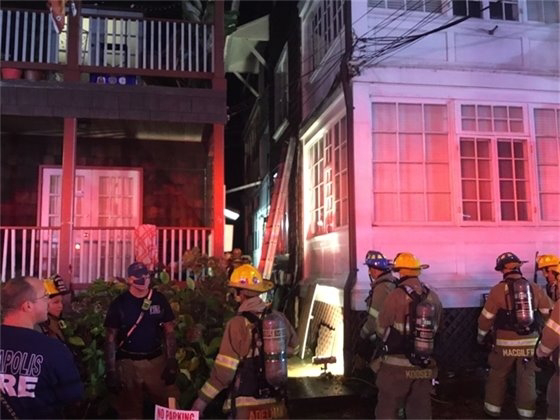 A family of 7 and one pet were displaced following a home fire on Prince George Street in Downtown Annapolis.
On Friday November 20, 2020 at approximately 11:20 pm, the Annapolis Fire Department was dispatched to the 200 block of Prince George Street for a reported structure fire. Upon arrival, firefighters discovered a storage area on the outside of the structure underneath the steps on fire with some extension into the structure. Firefighters made a quick attack on the fire and interior fire crews assisted all building occupants out of the structure safely. There were no reported injuries to civilians or fire personnel. It took approximately 20 minutes and 40 firefighters to bring the fire under control. Anne Arundel County and Naval District Washington Fire Departments provided mutual aid.
Due to the instability of the structure, it has been deemed an unsafe structure by the fire department. Red Cross was notified to assist with the displacement of 7 occupants and 1 dog. The fire originated in the storage shed underneath the steps. The cause is under investigation by the Annapolis Fire Investigations Bureau.