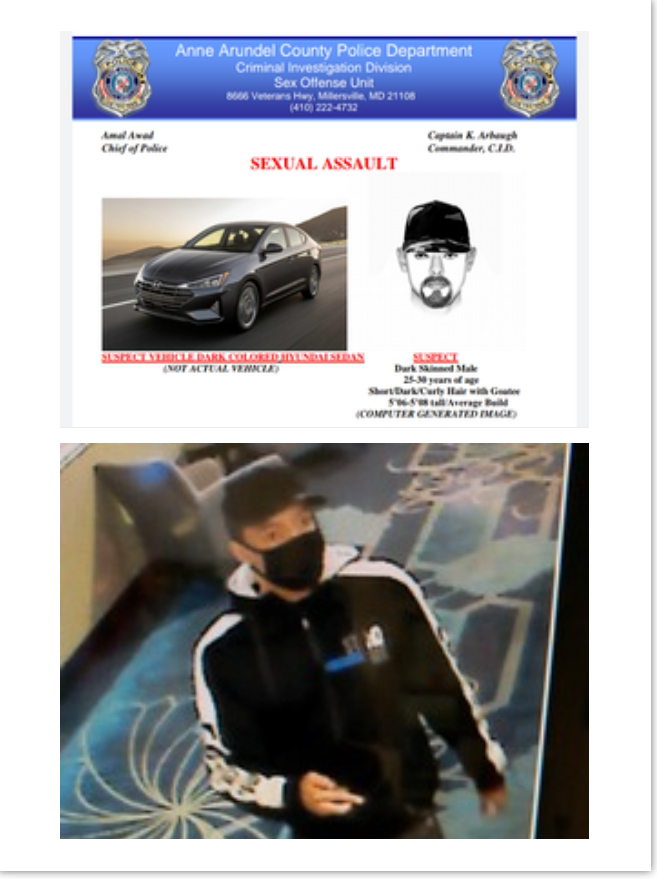 Anne Arundel County Police released a photo of the alleged suspect in connection with the rape of a woman in Glen Burnie.
On Wednesday April 28, 2021, at approximately 10:00 p.m. officers from the Anne Arundel County Police Department responded to the 6300 block of Ritchie Highway for a rape that just occurred. The adult female victim stated she had a ride arranged for her where she was picked up by an adult male in the 800 block of Elkridge Landing Road, Linthicum, Maryland. The male then drove her to the 6300 block of Ritchie Highway. The victim advised the driver drove her around the parking lot where he parked by a set of dumpsters. The male then pulled the victim from the car and pulled her behind the dumpsters. A witness observed this action take place and responded to the hotel lobby where she told the clerk to call 911.
The victim advised she was sexually assaulted by the male who was armed with a knife and also had personal belongings taken. She further stated the suspect fled in his vehicle after the assault while she ran into the lobby seeking help. Patrol officers arrived and secured the crime scene while other units searched for the suspect vehicle which was met with negative results. Detectives further scoured the area for additional witnesses from where she was picked up and where the assault occurred along with securing digital evidence.
﻿
The suspect was described as a dark skinned male, approximately 25-30 years of age, with short hair and a goatee and an average build. The suspect was wearing a dark sweatshirt, dark pants, tennis shoes and a dark colored baseball cap. The suspect was operating a dark colored Hyundai sedan during the assault.
Sex Offense Unit detectives are asking anyone with information regarding the identity of this suspect to contact 410-222-4732. Callers wishing to remain anonymous can contact the Anne Arundel County Police Tip Line 410-222-4700 or Metro Crime Stoppers at 1-866-7LOCKUP or Download P3Tips APP and Submit Your TIP or submit by web at www.metrocrimestoppers.org.