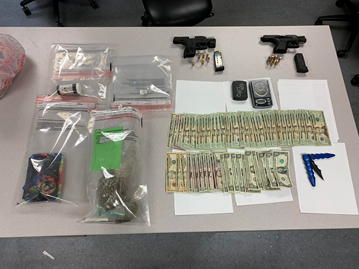 The Anne Arundel County Police Department today announced the arrest of two people after officers recovered multiple weapons, drugs and cash in Millersville.
On May 15, 2021 at approximately 11:45 a.m., officers conducted a traffic stop on a black Acura in the area of Veterans Highway and Brightview Drive.  Upon speaking with the driver, officers received information which led to a search of the vehicle resulting in the seizure of a loaded Taurus 625 9mm handgun,  142 grams of suspected marijuana, 25 oxycodone pills, a digital scale, baggies and other paraphernalia.
The adult male passenger was found to be in possession of a loaded Glock 27 .40 caliber handgun, which was reported stolen from Georgia. Both subjects were arrested, charged and identified as:
Tylius Jacal Watson (Driver)
DOB: 04/02/01
Unit block of Matilda Drive
Cumberland, Virginia
Twanasae Sincere Damon (Passenger)
DOB: 11/17/99
2600 block of  Stanford Place
Waldorf, Maryland