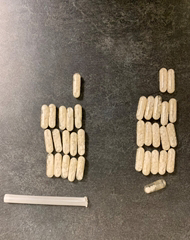 More than 30 capsuls containing heroin-fentanyl were seized from vehicle during a traffic stop in Glen Burnie.
On May 8, 2021 at approximately 12:25 a.m.,  officers pulled over a Honda sedan in the 7800 block of Parke West Drive.  Upon speaking with the driver, officers received information which led to a search of the driver resulting in the seizure of 18 clear capsules of suspected Heroin/Cocaine/Fentanyl in a clear plastic bag. A search of the passenger revealed 16 clear capsules of suspected Heroin/Cocaine/Fentanyl.
Both subjects were transported to Central Booking for charges and were identified as:
Dylan Camden Nicolaus (driver)
DOB: 03/17/92
Unit block of Bristol Avenue
Brooklyn, Maryland
Heather Marie Luedtke (passenger)
DOB: 01/01/94
500 block of Upton Road
Severn, Maryland