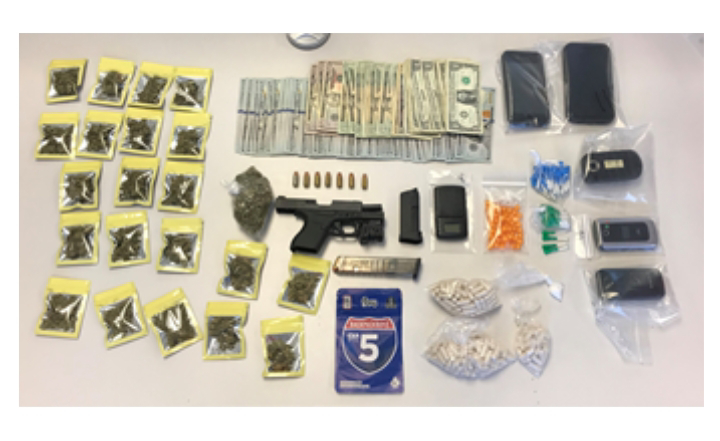 Anne Arundel County Police have arrested a 28-year-old man from Baltimore, who is accused of dragging an officer with his vehicle before trying to run over another officer in Glen Burnie.
On May 10, 2021 at approximately 11:45 a.m., officers were conducting a check on an occupied black BMW at the Exxon located at 8001 Crain Highway at which time they observed marijuana in plain view. Two black duffle bags were also observed in plain view in the passenger compartment. When officers asked the driver to exit the vehicle, he refused their commands.
The driver placed the vehicle into drive and started to accelerate towards one of the officers. Another officer reached inside the vehicle and attempted to grab the suspect at which time the driver grabbed the officer’s arm, dragging him along with the vehicle. The officer was able to break free and tumbled to the ground. A lookout was broadcast for the vehicle and suspect.
One of the black duffle bags was located on Winding Wind Road. Inside the duffle bag was a large amount of CDS, U.S currency and a loaded 9mm Glock 43 with attached laser sight.
Officers observed the male subject running out of an apartment building on Winding Wood Road and getting into a white Hyundai Elantra. The subject then attempted to run over an officer and then attempted to strike another officer’s vehicle. The driver pulled off of Winding Wood Road, swerving around another police vehicle and striking a tree on Green Branch Lane. Officers were able to apprehend the driver who was in possession of a BMW key fob. The BMW was found parked and running on Long Branch Terrace.
Another black bag was recovered from inside the vehicle. Inside the bag was a larger amount of suspected heroin, several individual Ziploc baggies of marijuana, and a clear magazine with 10 .380 caliber rounds. Also in the vehicle were a digital scale, speed loader and several cell phones.
The officer that was dragged was transported to BWMC for treatment of his minor injuries.
The following items were recovered / seized as a result of this incident:
Glock Model 43, 9 mm semi-auto handgun with attached laser sight
One magazine with ten (10) .380 caliber rounds
Clear plastic bag with 15 plastic vials with green top with suspected cocaine
1 tied off bag with suspected cocaine
1 tied off bag with 41 clear capsules with suspected heroin/Fentanyl
1 clear tied off bag with 38 plastic vials with suspected cocaine
1 clear bag with 54 orange plastic containers with suspected cocaine
21 individual zip-lock baggies with suspected marijuana
24 yellow/clear Ziploc bags with suspected marijuana
2 clear tied off bags each containing 100 clear caps of suspected heroin/Fentanyl
$9,843.00 U.S. currency
Digital scale
Five cell phones
The suspect was identified as:
Montell Gary Mills
DOB: 12/01/92
600 block of N. Bentalou Street
Baltimore, MD