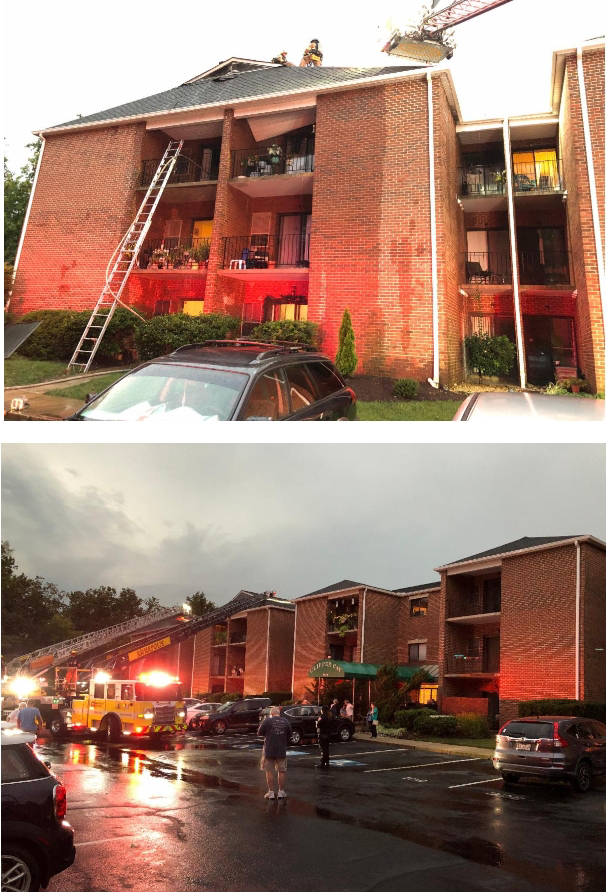 A multi-agency effort was required to assist nearly 40 seniors using canes and walkers following a lightning related fire at an Annapolis condo building.
Shortly after 6:00pm on Friday, August 13, 2021, multiple units responded to the Clipper Cay Condominium building on Shipmaster Way for an odor of smoke, but no visible  smoke or fire, on the first floor of the building. While firefighters were responding, an additional 911 call was received reporting smoke coming from the attic, as well as a third call from the fire alarm monitoring company, reporting a fire alarm activation in the building. Upon the initial arrival of firefighters, there was nothing evident from the street, but on their investigation, they found smoke from the eaves and smoke conditions in the attic. A second alarm was requested to provide staffing to assist with evacuating occupants. Many of the occupants used mobility aids such as canes and walkers and needed additional assistance evacuating the building
Firefighters located and extinguished a fire in the attic above two of the third-floor condos. While the fire damage was limited to the attic, extensive water damage occurred on the third floor throughout the length of the building, displacing the occupants.
Evacuees who were in need of assistance for the night were relocated to the Heritage Harbor Association Community Lodge. Thirty-nine occupants were assisted by Emergency Management, Crisis Response, and the Red Cross to ensure that they had arrangements for the night. The groups also coordinated with firefighters to retrieve medications and other critically needed items from the condos for residents.
All three agencies along with the Department of Social Services returned to the Community Lodge Saturday morning to assist occupants. It was determined that many occupants had left the scene on Friday evening either using their own vehicles or with family members and were still in need of assistance.