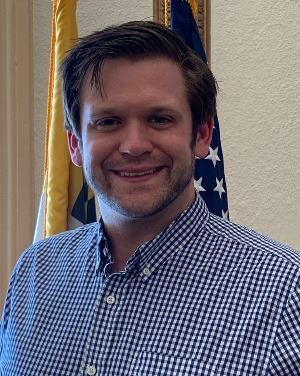 The newest Annapolis Alderman, Brooks Schandelmeier (D-Ward Five) was sworn in by Mayor Gavin Buckley at the beginning of the September 29 meeting of the Annapolis City Council. Schandelmeier was appointed by the Annapolis Democratic Central Committee (ADCC) to take over the seat of former Ward Five Alderman Marc Rodriguez, who resigned in August to relocate to Portland, Oregon.
Schandelmeier was selected by the ADCC during a Monday night, September 28, virtual meeting. Schandelmeier beat out two other contenders to be appointed to the City Council.
Ward Five is one of eight councilmanic districts in the City of Annapolis. It runs along Hilltop Lane between Spa Road and Primrose. It crosses Forest Drive to include Hunt Meadow.
“I want to thank Brooks for stepping up to serve,” said Mayor Buckley. “I also want to thank the ADCC for their transparent selection process. I look forward to working with Alderman Schandelmeier.”
Schandelmeier has lived in Ward Five since 2013. He is a past president of the Anne Arundel County Young Democrats, past president of the District 30 Democratic Club and the current treasurer of the Anne Arundel County Democratic Central Committee. In 2019, he participated in the Eastport and Forest Drive Communities and Governmental Agencies Task Force. He is employed by the American Hospital Association, a Washington, D.C.-based health care advocacy organization.
Schandelmeier has advocated on issues related to the environment, LGBTQ rights, good governance, and enhanced protections for members of the Hispanic community before the Maryland General Assembly, Anne Arundel County Council and Annapolis City Council. He plans to run for election in November 2021 to a full term of the Ward Five Alderman seat.