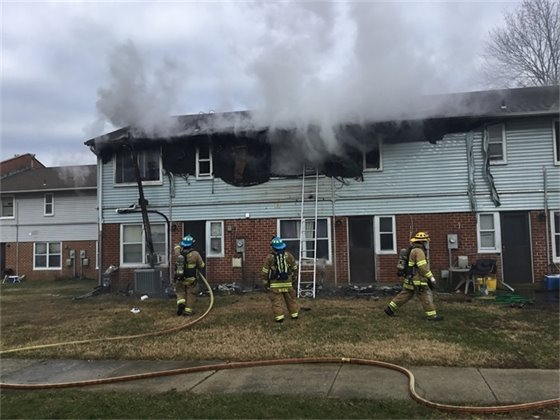 Local officials this evening said two people were injured and several people are now displaced following a multi-home fire in Annapolis' Robinwood community.
This afternoon at approximately 2:15pm, the Annapolis Fire Department was dispatched to the 1300 block of Tyler Avenue for a reported structure fire with multiple calls. First arriving fire crews found a middle of the row townhome with heavy smoke and fire showing from the second floor with extension into adjacent homes. First arriving crews made a quick attack on the fire while additional fire crews made entry into the adjacent homes in an attempt to prevent the fire from spreading further.
By the time access was made to the adjacent homes, it was discovered that the fire had extended into the attic spreading into the adjacent homes causing further damage. All occupants were out of the affected homes prior to arrival of the fire department.
There were a total of 3 townhomes affected, 2 of which sustained severe damage and the third home sustained minor damage. There were a total of 2 injuries, one civilian transported to a local area hospital with smoke inhalation and one firefighter with minor burns.
The Red Cross was contacted to assist with the displacement of approximately 10 civilians. It took approximately 30 minutes and 56 firefighters to bring the fire under control.  The Anne Arundel County and Naval District Washington Fire departments provided mutual aid.
Investigators from the Annapolis Fire and Explosives Services Unit determined the fire to be accidental caused by smoking materials coming in contact with a plastic covered mattress in the bedroom on the second floor.
At this time there are no other reported injuries to civilians or firefighters. The Housing Authority has been notified and is on scene helping those displaced.