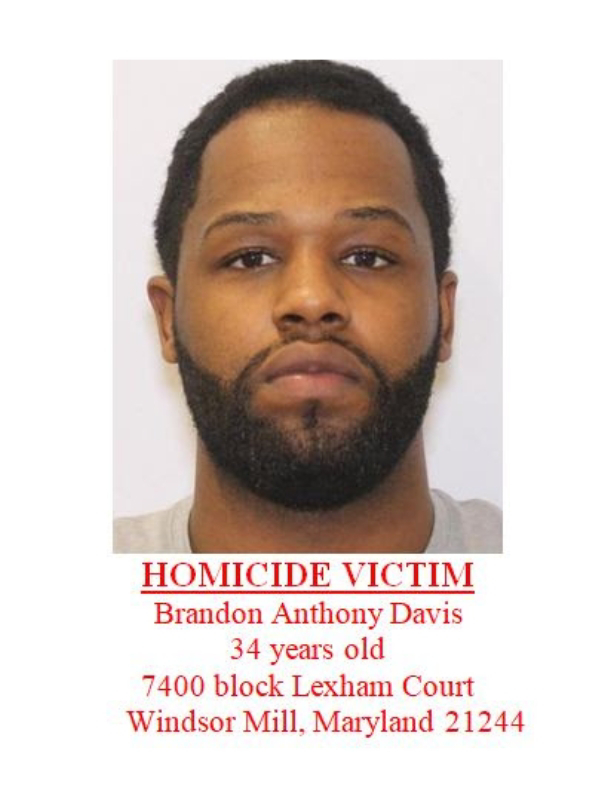 The Anne Arundel County Police Department has announced the victim in last night's fatal shooting.
Last night at approximately 12:17 a.m., Anne Arundel County Police responded to the intersection of Pioneer Drive and Arwell Court, Severn, Maryland for a report of a shooting. Upon arrival officers located one adult male victim lying in the roadway. Concerned citizens had already stopped and were rendering aid to the victim. Fire department personnel arrived on scene and rendered medical aid to the victim but he succumbed to his injuries where he was pronounced deceased at 12:33 a.m.
The victim appeared to have suffered gunshot wound(s) and was identified as Brandon Anthony Davis, a thirty four year old male from the 7400 block of Lexham Court, Windsor Mill, Maryland. Mr. Davis was transported to the Office of the Chief Medical Examiner so an autopsy could determine the exact cause and manner of death.
The Homicide and Evidence Collection Unit responded to the scene and interviewed several witnesses. During the search of the area several items of evidentiary value were located and secured as evidence. Once daylight arrived a secondary canvass was completed in order to locate additional witnesses.
This is an active and fluid investigation where the Anne Arundel County Police are urging anyone with information to come forward by calling the Anne Arundel County Homicide Unit at 410-222-4731. If people with information wish to remain anonymous they can also contact the Anne Arundel County Police Tip Line 410-222-4700 or Metro Crime Stoppers at 1-866-7LOCKUP or Download P3Tips APP and Submit Your TIP or submit by web at www.metrocrimestoppers.org.