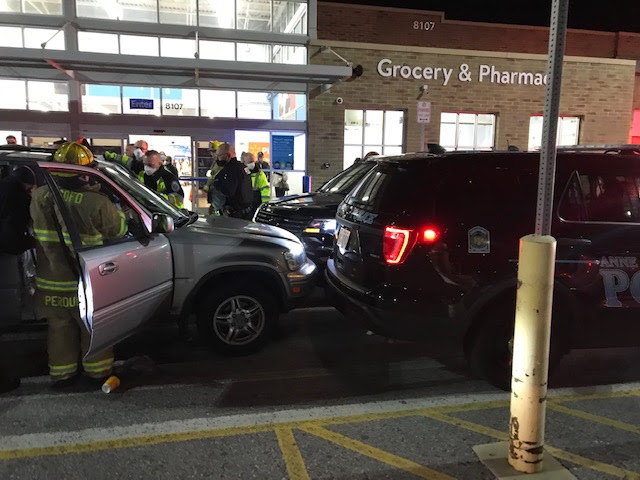 A couple of quick thinking Anne Arundel County Police officers helped to prevent a major accident in Pasadena yesterday after an elderly man became ill while driving.
On January 18, 2021 at approximately 5:45 p.m., officers responded to the Walmart parking lot located at 8107 Ritchie Highway in Pasadena for a report of an elderly person crying and appearing to be in distress while inside of their vehicle in the parking lot of the Walmart. As officers located the citizen seated in the driver’s seat of his running vehicle, he appeared to be disoriented and upset.
The officers attempted to gain the citizen’s attention by tapping on his windows, calling to him and waving their arms with no response.
Without warning, he accelerated his vehicle away from the officers and proceeded to drive erratically in the parking lot before barreling toward the main entrance of the Walmart. Concerned for the safety of multiple pedestrians in the area, officers utilized their patrol vehicles to box in the erratic vehicle by gently pressing their vehicle’s bumpers against the front and rear of the citizen’s vehicle, blocking it from further movement.
Despite this maneuver, the driver kept his foot on both the accelerator and brake, causing the vehicle’s engine to rev and smoke as it was pinned between the cruisers. He continued to be unresponsive and not aware of the officers’ presence, and a vehicle lock out kit was retrieved from an officer’s vehicle to safely unlock the driver’s door and bring calm to the confused citizen.
After a medical evaluation by the local fire department, it was determined that the driver was exhibiting signs of a medical emergency. The driver was transported to an area hospital.