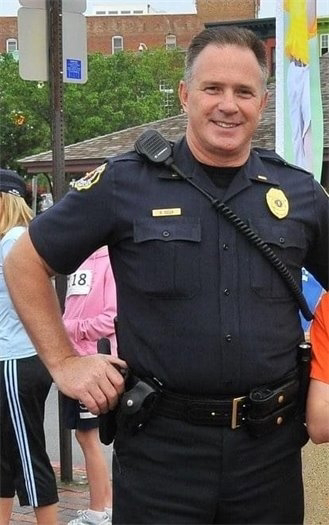 The law enforcement community at-large has taken to various social media platforms to mourn the loss of an Annapolis City Police Department Lieutenant.
Brian Carroll Della, 54, reportedly died on Tuesday, October 5, 2021.  According to a city website, Lieutenant Della, a long time member of the department, was assigned to the the Internal Affairs Division prior to his passing. Circumstances surrounding Lieutenant Della's death are unclear.
The Office of the Chief Medical Examiner told Report Annapolis News that Lieutenant Della's remains were in the custody of their office. An autopsy was completed, and the official cause of death continues to be investigated.
The Annapolis Police Department issued the following statement regarding Lieutenant Della's passing:
It is with heavy hearts the Annapolis Police Department confirms the tragic and unexpected death of Lt. Brian Della.  Lt. Della was a 28-year veteran of the Department where he served in numerous capacities. It would be nearly impossible to list all Lt. Della’s accomplishments and accolades spanning his nearly three decades long career in law enforcement.
Lt. Della joined the Annapolis Police Department in 1993 and served the Annapolis community throughout his entire law enforcement career. He was a dedicated officer who had a profound impact on countless fellow officers inside and outside the Annapolis Police Department and the City of Annapolis.  He truly cared about the community and has left a lasting legacy.  In 2001, then-Cpl. Della envisioned a fish camp for community children so that they could experience a fishing adventure. His camp continues today and has positively affected  hundreds of children in the community.   It was not uncommon to see Lt. Della distributing his local catch--whether fish or deer to community members on Clay Street.   Lt. Della could be found playing a pickup game of football with kids in the neighborhood, mentoring children or just simply talking with  members of the community.
Lt. Della achieved the following ranks in the Department—May 1996  promoted to Officer First Class, August 1999 promoted to Corporal, December 2001 promoted to Sergeant, and July 2005 to Lieutenant.  He served in nearly every division of the Department, including specialized units, Annapolis Special Emergency Team-ASET, Criminal Investigations Division-CID, and the Marine Unit to name a few.
Outside of the Department, Lt. Della was committed to his family, his wife Courtney and his three adult children and granddaughters.  He was an avid outdoorsman—he enjoyed hunting, biking, and hiking.
“This department is grieving from his loss,” said Annapolis Police Chief Edward Jackson. “It is a tragic loss for the Annapolis Police, but it is especially painful for Courtney and his children.
Please hold them close in your hearts, pray for them as they grieve and support them through this most difficult time. I am sorry for their loss and sorry for the loss to this department. Lt. Della was an outstanding police officer.”
Lt. Della earned a Bachelor of Science degree from Frostburg State University and a Master of Science degree from the Johns Hopkins University. He graduated from the FBI National Academy, Session 231 and held an adjunct faculty position at Anne Arundel Community College. He published numerous professional articles.
Visitation is on Friday, Oct. 8 from 3 to 5 p.m. and 7 to 8 p.m. at Broadneck EP Church, 235 Bay Dale Drive, Arnold, MD 21012. Services for Lt. Della will be held on Saturday, Oct. 9 at 10:30 a.m. at Broadneck EP Church.
In lieu of flowers, the family requests that donations be made to: Broadneck Evangelical Presbyterian Church https://broadneckep.ccbchurch.com/goto/giving
If you would like to send a message to the family please send  to:  Annapolis Police Department, Attn.  Della Family, 199 Taylor Avenue, Annapolis, MD 21401