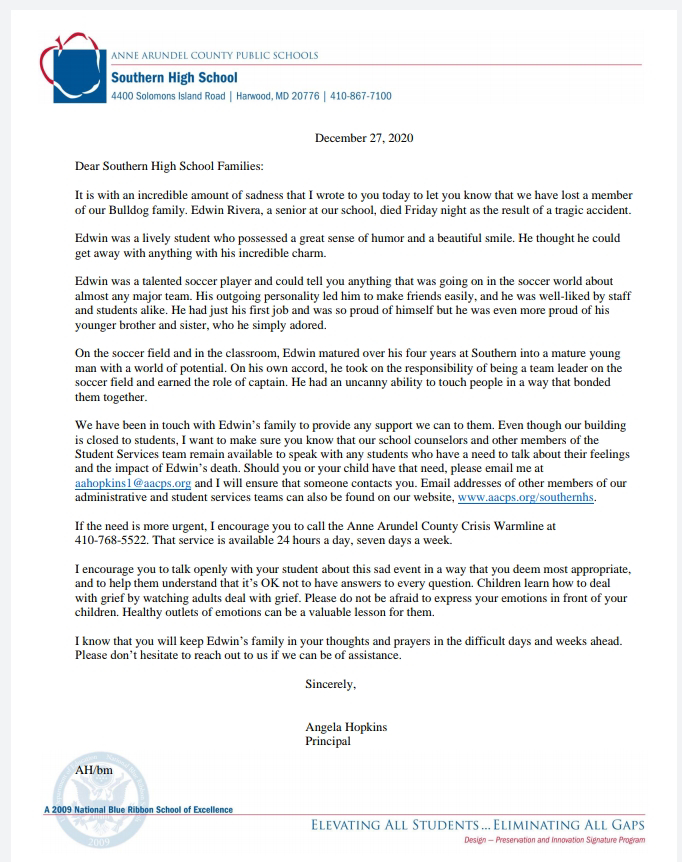 Members of the Southern High School community are mourning the loss of graduating senior, Edwin Roberto Rivera, 17, of Lothian.  Rivera was identified as the victim in a fatal Charles County shooting.
In a letter dated December 27, 2020, School Principal Angela Hopkins said Edwin was a lively student who possessed a great sense of humor and a beautiful smile. "He thought he could
get away with anything with his incredible charm," Principal Hopkins wrote.
According to the letter, On the soccer field and in the classroom, Edwin matured over his four years at Southern into a mature young  man with a world of potential. On his own accord, he took on the responsibility of being a team leader on the
soccer field and earned the role of captain. He had an uncanny ability to touch people in a way that bonded them together.
On December 25 at 6:45 p.m., officers responded to a single-family house on Mattingly Avenue in Indian Head for the report of a shooting. An initial investigation showed the victim, Edwin Roberto Rivera Juarez, 17, of Lothian, MD, was inside the home with two other teenaged relatives who were handling a firearm when the gun discharged while in the possession of a 13-year-old. The victim was struck one time in the upper body and was transported to a hospital where he was pronounced deceased.
Detectives are pursuing additional information, including how the teens got access to the firearm, and will review the case with the Charles County State’s Attorney’s Office once the investigation is complete.