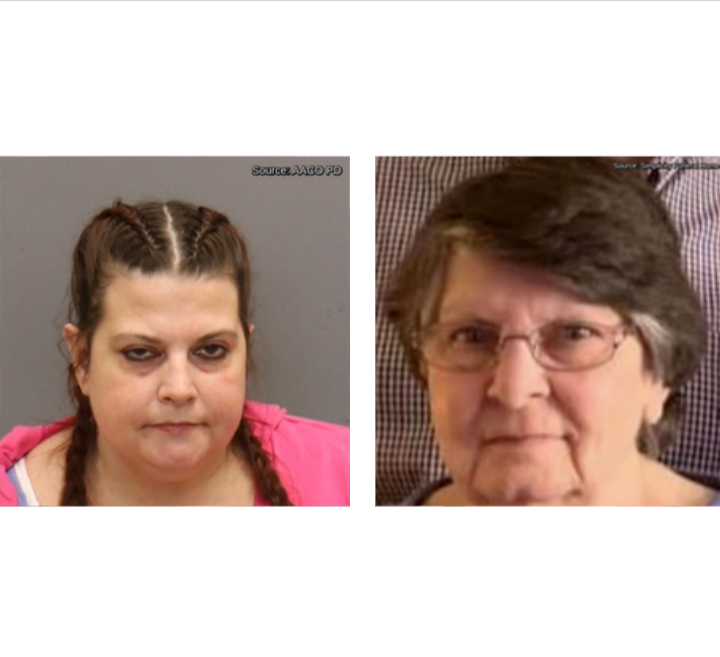 A woman from the Linthicum Heights area has pled guilty in connection with the murder of her elderly mother.
On April 19, 2022, Kimberly Lynn Windsor (pictured above on the left), 47, entered a guilty plea to second degree murder in the death of her mother, Carol Elizabeth Windsor (pictured above on the right), 74. She will be sentenced on July 12, 2022, court records show.
On Tuesday, May 19, 2020, at approximately 3:47 p.m., Anne Arundel County Police said its officers responded to the 1100 block of Winterson Road, Linthicum Heights, Maryland for an assault. A person called 911 because they had been on the phone with Carol Elizabeth Windsor when they overheard a struggle between Kimberly Lynn Windsor and Carol Windsor. Upon arrival, officers spoke with Carol Windsor, a seventy-four year old female from the 1100 block of Winterson Road, who advised she had been assaulted by her daughter, Kimberly Windsor.
According to police departmemt officials, Carol Windsor reported to police that Kimberly Windsor threw a clock at her head, pulled her to the ground, pulled her hair, kicked her, and ran over her with a wheelchair. Officers took photographs of the room in disarray and along with Carol Windsor’s injuries. Officers noted Carol Windsor was bleeding from her right hand in which she also complained of pain and experienced difficulty in breathing. Fire Department personnel responded to the scene and transported Carol Windsor to a local hospital for treatment of her injuries.
"Kimberly Windsor was located in a hotel room and positively identified by officers. When Officers attempted to arrest her, she assaulted the officers and fire department personnel," a police press release said. "Kimberly Windsor was taken into custody after a struggle where she was initially charged with three counts of Second Degree Assault. "
Reports said that on Sunday, May 24, 2020 at approximately 4:41 a.m., Carol Windsor succumbed to her injuries. Medical records noted Carol Windsor suffered from broken ribs coupled with chest pain and a chronic cough. She was transported to the Office of the Chief Medical Examiner where an autopsy revealed her cause of death as being cardiovascular disease complicated by the assault with the manner of death being homicide.
"This is truly heartbreaking,” said State’s Attorney Anne Colt Leitess. “The defendant viciously attacked her own mother because she wouldn’t go to the store for her and the subsequent assault contributed to the victim’s death. It’s extremely sad. I extend my deepest condolences to the victim’s son and all those impacted by the loss of Ms. Windsor.”
According to Ms. Windsor's obituary, Carol was of the Catholic faith and was active in her church when she was younger. "She worked at Kennedy Krieger Hospital for more than 25 years and finished her career as a medical transcriptionist for several area hospitals," the obituary said. "Ms. Carol enjoyed shopping, cooking, and baking. She had a good heart and could be very kind."