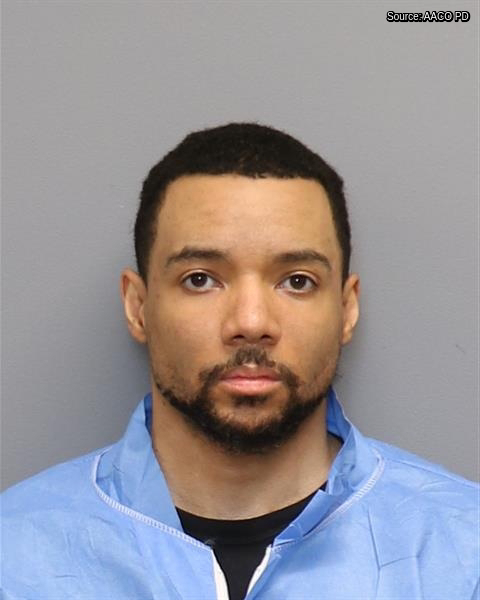 A Glen Burnie man has been sentenced after entering an alford plea in connection with the rape of a woman that reportedly occured on Ritchie Highway last year.
According to court records, an Anne Arundel County Circuit Court judge accepted the plea made by Aaron Anthony Cepeda, 31, in November, to three out of the fourteen offenses that he was originally charged with: second degree rape, second degree assault and perverted practice.
Under an alford plea, defendants maintains their  innocence but acknowledge prosecutors have enough evidence that could be used to find them guilty at trial.
On April 21, 2022, Cepeda was sentenced to 30 years, court records show.  Following his release from prison, Cepeda will be listed as a registered sex offender for the rest of his life, and he must also adhere to the terms of supervised probation for a period of 5 years.
A press release issued by the Anne Arundel County Police Department after the incident is below:
On Wednesday April 28, 2021, at approximately 10:00 p.m. officers from the Anne Arundel County Police Department responded to the 6300 block of Ritchie Highway for a rape that just occurred. The adult female victim stated she had a ride arranged for her where she was picked up by an adult male in the 800 block of Elkridge Landing Road, Linthicum, Maryland. The male then drove her to the 6300 block of Ritchie Highway. The victim advised the driver drove her around the parking lot where he parked by a set of dumpsters. The male then pulled the victim from the car and pulled her behind the dumpsters. A witness observed this action take place and responded to the hotel lobby where she told the clerk to call 911.
The victim advised she was sexually assaulted by the male who was armed with a knife and also had personal belongings taken. She further stated the suspect fled in his vehicle after the assault while she ran into the lobby seeking help. Patrol officers arrived and secured the crime scene while other units searched for the suspect vehicle which was met with negative results. Detectives further scoured the area for additional witnesses from where she was picked up and where the assault occurred along with securing digital evidence.
﻿
On Monday, May 10, 2021, Detectives obtained an arrest warrant charging Cepeda.
That afternoon, members of the Anne Arundel County Fugitive Apprehension Team located the suspect vehicle. As surveillance was being conducted, Cepeda exited an apartment and was taken into custody without incident as he went to enter his Hyundai sedan. Multiple search warrants were executed on his vehicle, residence and person. Several items of evidentiary value were recovered linking him to the sexual assault/robbery.