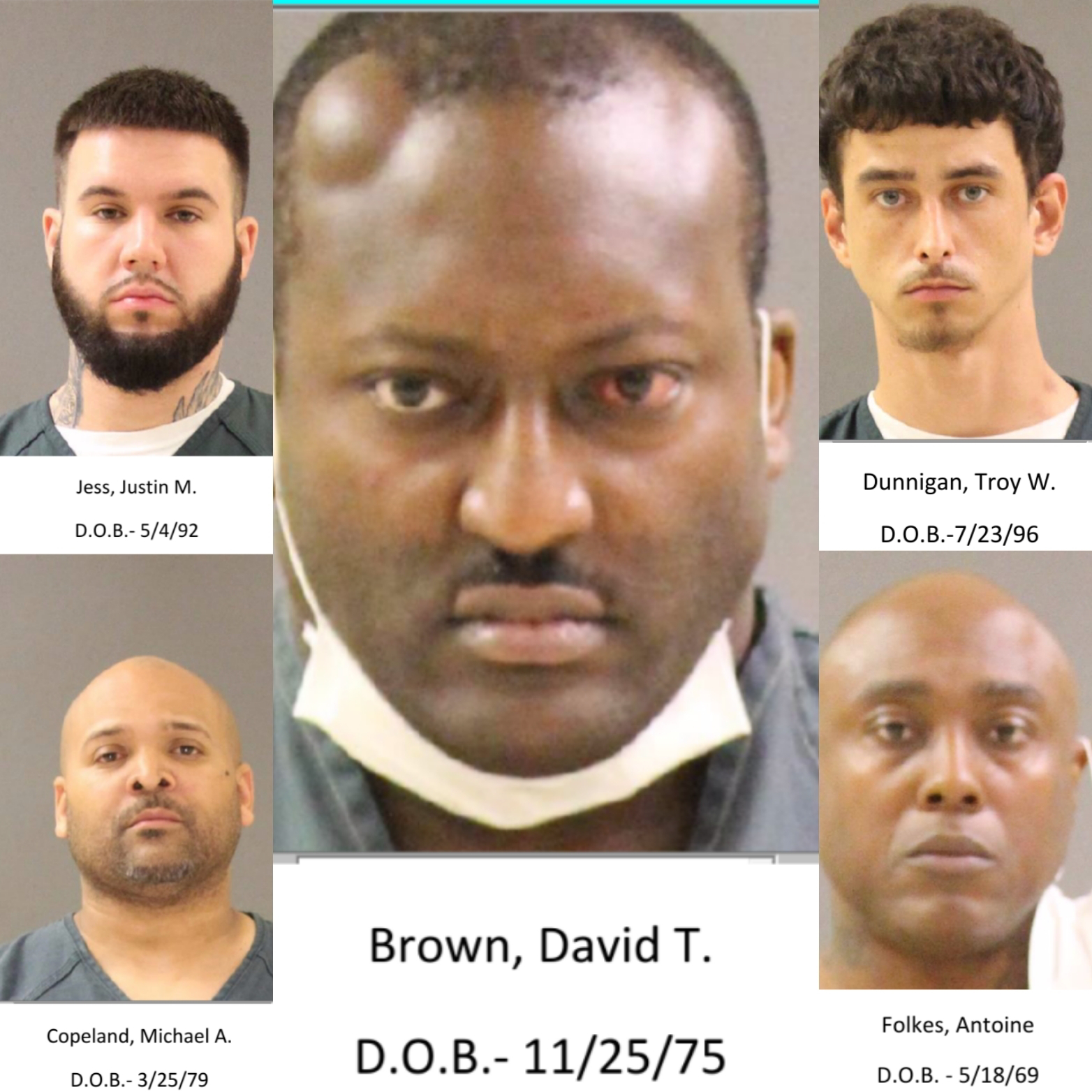 Maryland Attorney General Brian E. Frosh today announced the indictments of 15 members of a gang, including three men from Glen Burnie and one man from Pasadena, on multiple charges: participation in a gang, possession with intent to distribute heroin/fentanyl, cocaine, and MDMA, distribution of controlled dangerous substances, and CDS possession and conspiracy in Anne Arundel County, Baltimore County and Baltimore City.  The leaders of the gang also engaged in sex trafficking of numerous women.  The investigation was led by the Maryland Office of the Attorney General and the Anne Arundel County Police Department.
The investigation began in 2019 when Anne Arundel County police detectives learned of a large organization selling controlled dangerous substances out of a local hotel, The Comfort Inn.  The leader of the organization, David Brown, used hotel staff and his co-defendants to thwart efforts of law enforcement while keeping members of his organization stocked with illegal narcotics.  Some members of the organization traveled throughout Maryland and to other states to obtain the illegal narcotics that were later sold by the organization.  Some members of the organization furthered the efforts of the gang by forcing women to engage in sex trafficking and encouraging those victims to provide CDS to their “dates.”
For approximately eight months, Anne Arundel County detectives conducted surveillance of the defendants and the activities occurring at the hotel and surrounding areas.  During the course of the investigation, detectives observed members obtaining and distributing the controlled dangerous substances, made purchases from members of the organization, and observed hand-to-hand drug transactions.  Detectives learned how David Brown, Michael Copeland and other members of the organization forced women to engage in sex trafficking in exchange for rooms at the hotel, money and illegal narcotics.
Upon the arrests of David Brown, Michael Copeland and other indicted members of the organization, detectives located and seized 2 assault rifles and 7 handguns, 8 vehicles utilized by members of the organization to traffic illegal drugs and women, as well as 502 grams of crack cocaine, 119 grams of powder cocaine, over 3000 grams of marijuana, over 200 grams of heroin/fentanyl, 38 grams of MDMA, 1,316 grams of methamphetamine, and 13 strips of suboxone in addition to $27,000 in cash.
“These individuals engaged in the distribution of large amounts of illegal and deadly drugs,” said Attorney General Frosh.  “They engaged in a coordinated effort that crossed multiple counties.  In addition to the drug distribution, they trafficked women to further the efforts of the organization.  These indictments are the result of the collaboration of many law enforcement agencies working together to shut down this drug and human trafficking organization.”
“I am so proud of the men and women of our Narcotics and Special Investigations Section for their hard work and dedication to our community throughout this 15 month-long investigation,” said Anne Arundel County Interim Police Chief William Lowry.  “I am so grateful for our continued partnerships with the Anne Arundel County State’s Attorney’s Office, the Maryland Office of the Attorney General.  The outcome of this investigation would not have been possible without the support of the Governor’s Office of Crime Prevention, Youth, and Victim Services and their coordination of grant funding through the Maryland Criminal Intelligence Network.”
“This case illustrates how a unified prosecution strategy coupled with the foundation of a thorough police investigation has the power to disrupt criminal enterprises that reach far beyond our local borders and harm our communities,” said Anne Arundel County Arundel County State’s Attorney Anne Colt Leitess.  “This joint investigation resulted in the arrest and indictment of 15 people who are presumed innocent unless and until they are proven guilty in a court of law.  Their cases will be prosecuted in Anne Arundel County with both my prosecutors and the assistant attorneys general as a team.  I would like to thank Attorney General Brian Frosh, Anne Arundel County Police Chief William Lowry, and Governor Hogan’s Office of Crime Control and Prevention for partnering in the Md. Criminal Investigation Network (MCIN) team in this matter.”
In making today’s announcement, Attorney General Frosh thanked Organized Crime Chief Katie Dorian, the Anne Arundel County Police Department’s Narcotics & Special Investigations Section, Anne Arundel County State’s Attorney Anne Colt Leitess, and Assistant Attorney General Kelly A. Hooper-McCamey and Assistant State’s Attorney Jennifer Doud, who are prosecuting the case.
This investigation was a part of the Maryland Criminal Investigation Network (MCIN) Initiative under the Governor’s Office of Crime Control and Prevention.  A criminal indictment is merely an accusation of wrongdoing, and a defendant is presumed innocent until the State proves the defendant guilty beyond a reasonable doubt.
Indicted:
David Tico Brown, 44, Baltimore City
Michael Anthony Copeland, 41, Glen Burnie
Antoine Crockett, age 39, Windsor Mill
Troy Wayne Dunnigan, 24, Glen Burnie
Charles Marion Edwards, Jr., 54, Baltimore City
Antoine Folkes 51, Pasadena
Vernon Ralph Harris, 50, Reisterstown
Patrick John Hines, 45, Arbutus
Justin Michael Jess, 28, Glen Burnie
Lawrence Oliver Jones, Jr., 35, Baltimore City,
Lawrence Ontario Matthews, 44, Baltimore City
Michael Rebstock, 47, Baltimore City
Derrick Rodney Ricks, 28, Baltimore City
William Henry Shipley, Jr., 28, Baltimore,
Andrew Lee Tillman, 36, Rosedale