Unofficial Primary Election Results: With at least 876 ballots to be counted, Pindell-Charles leads Smith-Brown by wide margin in Ward 3; Finlayson gains on Pratt-Strong who has small lead in Ward 4 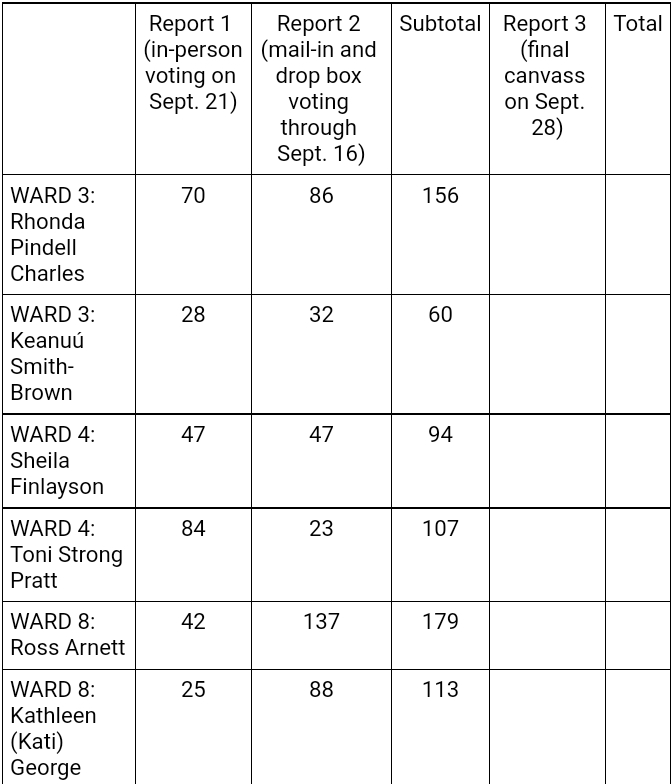 Of the eight Annapolis aldermanic wards, only three races were contested in the primary, including Ward 3 where incumbent Democrat Rhonda Pindell Charles faced challenger Keanuú Smith-Brown; Ward 4 where incumbent Sheila Finlayson faced challenger Toni Strong Pratt; and Ward 8 where incumbent Ross Arnett faced challenger Kathleen (Kati) George.
The vote counting is conducted across three reports and will conclude on Tuesday, September 28 with a final vote canvass.
The first report included 307 votes from Sept. 21 Primary Election Day in-person polling and was reviewed  after the polls closed at 8 p.m. on the same day.
The second report, and first canvass, included 414 votes from vote-by-mail and dropbox ballots and took place between 11 a.m. and 12:45 p.m. on Wednesday, Sept. 22
The third report, and final canvass, will include at least 876 remaining ballots received after Sept. 16, plus whatever additional ballots were mailed up to and including on Primary Election Day and will be conducted on Tuesday, Sept. 28.