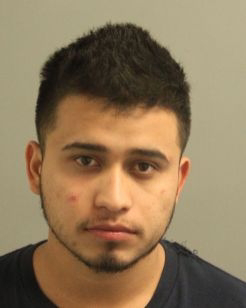 U.S. District Judge James K. Bredar sentenced Moises Alexis Reyes-Canales, a/k/a “Sicopita”, age 23, of Annapolis, to 35 years in federal prison, followed by five years of supervised release, for conspiracy to participate in a racketeering enterprise and to using, carrying, and discharging a firearm during a crime of violence, in connection with his MS-13 gang activities, including a murder and two attempted murders.
According to his plea agreement and other court documents, since about March 11, 2016, Reyes-Canales was a member and associate of MS-13, and participated in a racketeering conspiracy that included assaults, murder, attempted murder, robbery, and drug trafficking.  Specifically, Reyes-Canales admitted that he participated in the murder of a suspected rival gang member, and conspired and attempted to murder two victims in Annapolis.  In addition, between January 2016 and February 2017, Reyes-Canales and other MS-13 members/associates sold marijuana to raise funds for the gang. The drug proceeds were used for, among other purposes, the purchase of more narcotics, weapons, and to send to MS-13 members and associates in other states and in El Salvador.
As part of the racketeering conspiracy, Reyes-Canales admitted that on March 11, 2016, he and other MS-13 members and associates planned and agreed to murder Victim 1, whom the gang suspected of being a rival gang member. Prior to the murder, Reyes-Canales received authorization to commit the murder from MS-13 leadership.  Juan Carlos Sandoval-Rodriguez and another MS-13 member/associate lured Victim 1 to Quiet Waters Park in Annapolis, Maryland, and once Victim 1 arrived at the park, members of the gang struck Victim 1 in the head with a branch or stick.  Reyes-Canales, co-defendants Marlon Cruz-Flores, Fermin Gomez-Jimenez, and other members and associates of MS-13, then stabbed Victim 1 repeatedly, killing him.  Reyes-Canales directed everyone during the murder.  While Reyes-Canales and other members of the gang stabbed Victim 1, Co-conspirator 1 and other MS-13 members/associates stood watch outside of the park to ensure no one entered or left the park, and to watch for police presence, so that the gang could complete the murder of Victim 1.  During this time, Co-conspirator 1 communicated by phone and through text messages with Reyes-Canales and Cruz-Flores inside the park, to let them know no one entered the park and they could complete the murder.  After Victim 1 was killed, Gomez-Jimenez left the park to stand watch, so that other MS-13 associates could enter the park help bury Victim 1 in a shallow grave inside the park, at the direction of Reyes-Canales.  Law enforcement did not locate Victim 1’s body until August 28, 2017, when it was exhumed by law enforcement.
As detailed in their plea agreements, on October 23, 2016, Reyes-Canales, Gomez-Jimenez, and other members and associates of the MS-13 Hempstead clique in Annapolis, devised a plan to murder Victim 2, an unlicensed taxi driver.  Reyes-Canales, Gomez-Jimenez, Cruz-Flores, co-defendant Manuel Martinez-Aguilar, and other members and associates of MS-13, met at Quiet Waters Park to discuss the plan to murder Victim 2.  At the meeting, each member of the conspiracy was assigned a task to complete the murder and dispose of the evidence.  The group planned to use machetes, knives, and guns to kill the victim.  Reyes-Canales and Cruz-Flores each had a firearm and all the members of the conspiracy were aware that guns would be used in the murder.
A co-conspirator called Victim 2 using another member’s cell phone to arrange for an unlicensed taxi ride.  Victim 2 arrived with another passenger, Victim 3.  Cruz-Flores asked Victim 2 to drive to the area of the 700 block of Annapolis Neck Road in Annapolis.  When they arrived, Reyes-Canales approached the vehicle and pointed a gun at the victims and Cruz-Flores also produced a gun and pointed it at the victims.  Victim 3 attempted to run away and Cruz-Flores shot Victim 3 in the leg, while another MS-13 member repeatedly attacked Victim 3 with a machete.  Victim 2 also tried to run. Reyes-Canales attempted to shoot Victim 2, but his gun failed to discharge.  Co-defendant Martinez-Aguilar and another MS-13 member took Victim 2’s vehicle and attempted unsuccessfully to run him over with the car.  Reyes-Canales, Gomez-Jimenez, and other conspirators chased Victim 2 and Gomez-Jimenez repeatedly stabbed Victim 2 with a knife.  The conspirators fled when they heard police sirens.  A short time later, police arrested Gomez-Jimenez nearby with Victim 2’s blood on his hands and clothes.  A surveillance camera in the area captured Gomez-Jimenez assaulting Victim 2 and the attempt to run over Victim 2 with Victim 2’s vehicle.  DNA subsequently confirmed that the blood on Gomez-Jimenez’ hands matched Victim 2’s blood.  Both victims were transported to the University of Maryland Shock Trauma Center with life threatening injuries.  Both victims survived but have permanent injuries as a result of the attack.
Co-defendants Marlon Cruz-Flores, age 25, and Manuel Martinez-Aguilar, a/k/a “El Lunatic” and “Zomb,” age 22, both of Annapolis, Maryland, previously pleaded guilty to the racketeering conspiracy and gun charge.  Cruz-Flores was sentenced to 38 years in federal prison and Martinez-Aguilar was sentenced to 24 years in federal prison.  Co-defendant Fermin Gomez-Jimenez, age 23, of Annapolis, Maryland pleaded guilty to conspiracy to participate in a racketeering enterprise and to using, carrying, and discharging a firearm during a crime of violence, and David Diaz-Alvarado, age 20, also of Annapolis, pleaded guilty to murder in aid of racketeering in connection with his MS-13 gang activities.  Co-defendant, Juan Carlos Sandoval-Rodriguez, age 23, of Annapolis was convicted on October 31, 2019, of murder in aid of racketeering and conspiracy to commit murder in aid of racketeering after a nine-day jury trial for the murder of Victim 1.  His sentencing hearing is scheduled for February 10, 2011 at 10 a.m. He faces a mandatory sentence of life in prison.  All of the defendants remain detained.