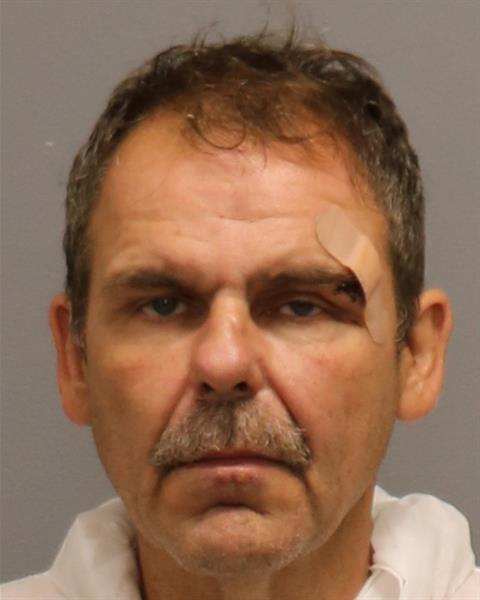 An Annapolis man has entered a plea of guilty to one count of first degree assault and one count of manslaughter after trying to hit an officer with his truck and fatally injured a female passenger who was thrown from the car during a police pursuit last year in Brooklyn.
The court accepted the plea of David Bogdanowicz, 53, before scheduling a sentencing hearing for December 2, 2021.  Prosecutors are seeking a prison term of 35 years, with all but 25 years suspended.
On Tuesday, July 21, 2020 at approximately 2:36 p.m., the Anne Arundel County Police Fugitive Apprehension Team was looking for a wanted adult male suspect later identified as Bogdanowicz, who had outstanding arrest warrants for Violation of a Protective Order, Assault and Trespassing. The detectives garnered intelligence that he may have been frequenting the area of Church Street and Ritchie Highway operating a flatbed truck. Fugitive detectives spotted the truck and observed Bogdanowicz, operating it along with one adult female passenger inside.
Detectives followed the vehicle where it made a U-turn into the parking lot of a local business in the 700 block of Church Street. Detectives were able to stop the truck. Detectives converged on the Ford Super Duty flatbed truck where they identified themselves as police officers and gave orders for Bogdanowicz to stop the truck. Bogdanowicz backed the truck up and accelerated forward in the direction of one of the fugitive detectives. The detective discharged one round, striking the windshield of the truck.
The truck veered off the parking lot and onto Church Street where the adult female passenger, later identified as Jennifer Patterson, 42, was expelled from the vehicle. Once ejected, Bogdanowicz, then ran over Ms. Patterson and continued to flee from the area. Fugitive detectives immediately began rendering aid to Ms. Patterson with the use of a tourniquet and cardiopulmonary resuscitation. Detectives continued these life saving measures until relieved by paramedics. Ms. Patterson eventually succumbed from her injuries at the scene.
Other fugitive detectives began scouring the area where the truck was seen fleeing. A detective located the flatbed truck hidden and abandoned in an alley in the 1600 block of Popland Street, Curtis Bay, Maryland. Shortly thereafter, a detective spotted Bogdanowicz in the area of Popland Street and Curtis Avenue where he tried to flee on foot, but eventually surrendered and was taken into custody without further incident.
The suspect vehicle, which had been reported stolen during a burglary on July 20, 2020 from a business located in the 1100 block of Dorsey Road, Glen Burnie, Maryland, was secured as evidence.
Homicide Detectives charged Bogdanowicz with Second Degree Murder, First Degree Assault, Theft of a Motor Vehicle and Resisting Arrest. He was also served with the outstanding arrest warrants.
“The defendant used his vehicle as a weapon,” said State’s Attorney Anne Colt Leitess.  “Not only did he attempt to hit a law enforcement officer with his vehicle to evade arrest but his actions also took the life of his passenger, Ms. Jennifer Patterson, who died trying to escape the defendant’s vehicle and her death is tragic.”